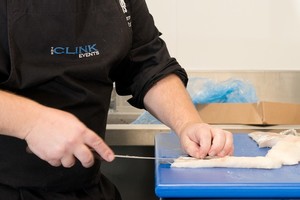 • The Clink Kitchens expected to open at 25 prisons by the end of the year
• Scheme reduces reoffending rates by almost a third, helping to keep streets safe

Thousands of offenders will be steered away from a life of crime thanks to the roll-out of The Clink training kitchen scheme to 25 jails by the end of the year, Prisons Minister Alex Chalk has announced.

Already running at eight prisons including HMPs Bristol, Downview, and Styal, the programme sees prisoners train in professionally-run prison kitchens for up to 35 hours a week – preparing and cooking thousands of meals daily – while simultaneously working towards professional qualifications which will help them find employment on the outside.

The Clink has already helped over 2,500 offenders into stable and secure jobs since launching just over a decade ago through their training initiatives, with the expansion announced today expected to support a further 2,000 prisoners into employment.

In 2019 alone, The Clink trained up over 440 prisoners – a total of 330,000 training hours – with over 280 employers across the country taking on Clink graduates upon release from prison.

Research shows that ex-offenders in work are more likely to turn their backs on crime for good, with prisoners who have taken part in The Clink’s training scheme almost a third less likely to go on to commit further offences – reducing the £18 billion a year cost of reoffending and keeping communities safe.

"Prisoners with a job on release are far less likely to reoffend – meaning if we can provide the path to employment, we can make our communities safer.

"As we continue to build back safer from the pandemic, it is absolutely vital that we continue to address the root causes of crime by supporting offenders to turn their lives around – and this scheme will do precisely that for thousands of ex-prisoners."

"The roll-out of The Clink Kitchens project over the next three years to 70 prisons in England and Wales, will enable us to continue to repair society and support the hospitality industry that has a major skills shortage.

"Social mobility is at the heart of many companies’ recruitment agenda and employing a highly trained Clink graduate not only is a benefit to their business but increases the diversity of their workforce."

The partnership with The Clink Charity is one of many government schemes aimed at supporting offenders into employment with the ultimate aim of cutting crime. Other initiatives include work placements for dozens of offenders during the construction of HMP Five Wells (Northamptonshire) and the new prison in Glen Parva (Leicestershire).

Boosting access to work and safe accommodation for prison leavers will also help build back safer communities by cutting crime and reducing reoffending.

From:
Ministry of Justice
Her Majesty’s Prison and Probation Service
Alex Chalk MP