Our reports relating to GCSEs & A levels taken in summer 2019, the delivery of vocational & technical qualifications, and a range of other related analyses 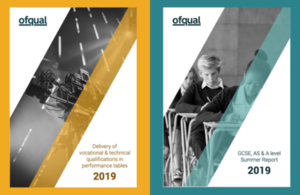 Ofqual has today (13 December 2019) published its annual review of GCSEs, AS and A levels in summer 2019, alongside a new report, that reviews the delivery of vocational and technical qualifications in performance tables. Another new report looks at how standards were set and maintained across some of these qualifications in summer 2019. Several other reports and research documents have also been published.

The summer exam series is by far the largest of any single exam series we regulate. This report provides an overview of the exam boards’ planning, administration and marking over the series, along with a summary of the awarding process and what happened post-results. It focusses only on GCSE, AS and A level qualifications offered in England.

We conclude that the exams in 2019 were carefully planned, effectively managed and successfully delivered. The report includes a summary of the key issues which arose in the lead up to, during and immediately after the series, and the actions we took in response. This summer was particularly notable for a small number of leaks of genuine exam questions, including from A level maths and a small but growing number of hoax exam questions circulated on social media.

Delivery of vocational and technical qualifications in performance tables

We consider that most awarding organisations have managed the events they have reported to us effectively. We do have some specific concerns, however, including the repetition of assessment material errors over time. We are currently carrying out a programme of audits looking at the strategies that some awarding organisations employ to mitigate the effects of such errors. We will use the findings to inform action we might require awarding organisations to take to reduce any risks to the safe delivery and awarding of qualifications next year.

Setting and maintaining standards in summer 2019

We monitor GCSE, AS and A level awards, along with a number of vocational and technical qualifications that are included in school and college performance tables to make sure, so far as possible, that there is a level playing field for students. Our view is that in summer 2019, standards were aligned between exam boards in each GCSE, AS and A level qualification. We also conclude that there was better alignment of Applied General qualifications in summer 2019 than in previous years as a result of changes we had asked exam boards to make. This report also provides a summary of contextual analysis about the National Reference Test.

In the move to reformed GCSEs and A levels, our approach to maintaining standards has been for exam boards to prioritise statistics about prior attainment over examiner judgement. Now that the transition is largely complete, we are keen to make sure exam boards are able to detect any changes in student performance over time. In GCSE English and maths we now have evidence from the National Reference Test, but we have also been researching other ways of detecting changes using comparative judgement and/or rank ordering techniques. In summer 2018 we piloted several different versions of comparative judgement and in summer 2019 we ran a live pilot in GCSE English language. The work has been positive and we are reporting our initial findings today.

Reformed A level maths qualifications were available for first teaching from September 2017. Unique amongst reformed A levels, students were allowed to certificate at the end of the first year of teaching, reflecting the way in which some candidates wishing to enter further maths have historically structured their learning and assessment. We questioned why the grade boundaries were so different between that first award in summer 2018 and this year’s awards, and we committed to carefully investigate this matter. Our detailed work indicates that the differences in grade boundaries set in 2018 and 2019 reflect the removal of the opportunity for year 13s to re-sit AS units, and that the 2019 papers were (in some cases) more difficult. We have considered with the exam boards whether there is a case to re-visit the grade boundaries set in reformed A level maths specifications in 2018. On balance, we believe there is not.

As the programme of GCSE and A level reform has been implemented, we have undertaken work to consider and evaluate the implications of the changes to the qualifications. This new report explores teachers’ views on the degree to which reformed GCSEs in maths and English literature prepare students for A level study in these subjects – thus considering one of the policy aims of reform. The report finds that the majority of maths teachers commented that the reformed maths GCSE prepares students at least as well for A level study, if not better, than the legacy GCSE. Teachers’ perceptions of the reformed English literature GCSE were more mixed, but of those that commented on students’ general preparedness for English literature at A level, the majority believed that students were equally or better prepared having studied the reformed GCSE.

"The reports we have published today are the result of a broad range of important work we have conducted in recent months to ensure standards are being maintained and to reinforce confidence in regulated qualifications. The research we have published also demonstrates our strong commitment to innovation to make marking and awarding of grades as good as it possibly can be for students and all other users of these qualifications."