Secretary of State for Levelling Up, Housing and Communities confirms new appointment 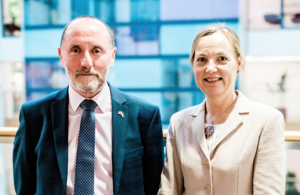 The Secretary of State for Levelling Up, Housing and Communities, has today (25 March 2022) confirmed Bernadette Conroy as the new Chair of the Regulator of Social Housing. The appointment follows a hearing by the Housing, Communities and Local Government Select Committee on Monday 21 March, after which they endorsed her suitability for the role.

She has been appointed for a period of three years, commencing on 1 April 2022.

"I am delighted to appoint Bernadette Conroy as the new Chair of the Regulator of Social Housing.

"Bernadette brings with her a wealth of experience which will be invaluable as we transform how the social housing sector is regulated and I look forward to working closely with her over the next three years."

Chair of the Regulator of Social Housing, Bernadette Conroy, said:

"I am honoured to be appointed as the new Chair of the Regulator of Social Housing. This is a challenging time in the sector as we look to implement the enhanced regulation set out in the Social Housing White Paper.

"I look forward to building on the strong leadership of my predecessor, Simon Dow, as we create a more diverse Regulator that embraces proactive consumer regulation."

Bernadette Conroy is an experienced Chair and Non-Executive Director (NED) operating across a number of sectors. These include financial services regulation, where she is a NED for the Financial Conduct Authority and housing, where she is Chair of Network Homes. She is also the Independent Chair of the Buildings and Estates Committee of Cambridge University with responsibility for the development and maintenance of the University’s estate and its capital build programme and a NED for Milton Keynes Development Partnerships. Prior to taking on a non-executive portfolio, Bernadette held a number of executive roles in financial services, latterly as Global Head of Strategy and Planning for HSBC Corporate, Investment Banking and Markets. She has an MA in Mathematics from Cambridge University and an MBA from INSEAD. In 2020, Bernadette received the Sunday Times Not for Profit Non-Executive Director of the Year award.

The Regulator of Social Housing (RSH) is one of DLUHC’s key arm’s length bodies. It seeks to promote a viable, efficient, and well governed social housing sector able to deliver homes that meet a range of needs. The RSH is also responsible for regulation of consumer standards, ensuring that existing tenants are provided with homes that are safe, and that landlords deliver good services.

Bodies such as the RSH are one of the ways the government is improving the lived experience of social housing tenants and ensuring they can hold landlords to account. The Charter for Social Housing Residents: Social Housing White Paper, published in November 2020, recognised the fundamental role of effective regulation in protecting and empowering social housing tenants, ensuring that landlords are effectively held to account to deliver the services expected of them.

It set out the government’s commitment to significantly expand the Regulator of Social Housing, legislating to remove the ‘serious detriment’ test (where there is evidence of a standards breach at organisational level) and introduce a new, proactive approach to regulation of consumer issues such as quality of homes, landlord services and transparency, while maintaining robust economic regulation of the sector. Regulation of the social rented sector will also play support delivery of the commitment made in the Levelling Up White Paper to reduce non-decency in the rented sectors by 50%.

From:
Department for Levelling Up, Housing and Communities
Regulator of Social Housing
Eddie Hughes MP