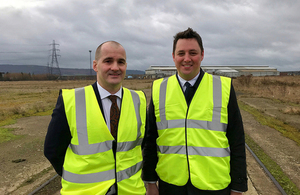 A new chapter for manufacturing in the Tees Valley begins in 2019 thanks to £14 million of government investment into the South Tees Development Corporation, bringing the total to £137 million.

The land is set to be transformed and made ready for development creating new jobs, growth and attracting over half a billion pounds of private sector investment.

Work to establish construction access and utilities, a new spine road and roundabout is set to begin in the first quarter of 2019 with new commercial tenants on the site expected from 2021.

"Our investment of £14 million in the South Tees Development Corporation demonstrates this government’s commitment to building a stronger more resilient economy in the Tees Valley and across the Northern Powerhouse.

"This government is firmly behind the Tees Valley, and I’m determined to ensure its people get the most out of the exciting growth opportunities available on their doorstep.

"Our investment of £14 million into this site will help transform this derelict piece of land into a burgeoning new industrial quarter, which is expected to create 500 new jobs and attract an extra half a billion pounds of private investment.

"It’s a further demonstration of how we’re helping to build a new golden era for the North East as part of our Industrial Strategy, and ensuring the Tees Valley is truly open for business as we are set to leave the European Union."

"Government has committed £137 million to the Development Corporation over the last year, and this latest £14 million funding is vital to kick-start immediate work to redevelop land to help spearhead the transformation of the area.

"These huge schemes will deliver hundreds of quality jobs for local people, drive growth for the Tees Valley economy and continue our history of manufacturing excellence.

"This £14 million shows government is continuing to listen to us and this is another step closer to the Development Corporation becoming a massive success story for not just the North East but for the UK."

At the Autumn Budget 2018 the government brought its investment in the South Tees Mayoral Development Corporation to £137 million in the last year, with an announcement of up to £14 million to redevelop land on the site upon the submission of a successful business case.

Today, (7 January 2019), Northern Powerhouse Minister Jake Berry MP confirmed that a robust business case had been approved and the £14 million investment will be paid over a 5-year period.

Today’s announcement is part of a wider package of investment into Teesside provided by the government. This includes designating the South Tees Development Corporation as a Special Economic Area enabling further business rate retention and greater long-term investment in the region.

Through joint investments made by the Department for Business, Energy, and Industrial Strategy and the Ministry of Housing, Communities and Local Government, £137 million is being spent on the home of the former Redcar SSI site to continue supporting job creation and growth in this key Northern Powerhouse region.