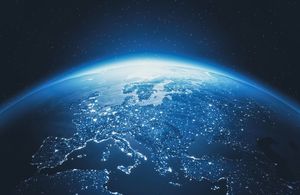 The government has today (3 July) led a successful bid to acquire OneWeb, which develops cutting-edge satellite technology in the UK and in the US.

The move signals the government’s ambition for the UK to be a pioneer in the research, development, manufacturing, and exploitation of novel satellite technologies through the ownership of a fleet of Low Earth orbit satellites.

Business Secretary Alok Sharma confirmed that the government will invest $500 million and take a significant equity share in OneWeb. This is alongside Bharti Global Ltd, which is part of a group that controls the third largest mobile operator in the world. Bharti will provide the company commercial and operational leadership, and bring OneWeb a revenue base to contribute towards its future success.

The deal will enable the company to complete construction of a global satellite constellation that will provide enhanced broadband and other services to countries around the world.

The deal also offers the UK strategic opportunities across a wide range of other applications, working with our international allies.

With a sovereign global satellite system, the UK will further develop its advanced manufacturing base, making the most of its highly skilled workforce as the hardware is further developed and equipment and services are deployed to make the most of this unique capability.

OneWeb will also contribute to the government’s plan to join the first rank of space nations, along with our commitment to making the UK a world leader in science, research and development.

The deal is subject to US court approval and regulatory clearances and is expected to close before the end of the year.

It follows the formation of the UK’s first-ever National Space Council, chaired by the Chancellor of the Exchequer, to consider how space policy can enhance the country’s prosperity and place in the world, as well as our wider national security interests.

"This deal underlines the scale of Britain’s ambitions on the global stage.

"Our access to a global fleet of satellites has the potential to connect millions of people worldwide to broadband, many for the first time, and the deal presents the opportunity to further develop our strong advanced manufacturing base right here in the UK."

The UK space sector is an economic success story, growing by over 60% since 2010. The sector, which already supports £300 billion of UK economic activity through the use of satellite services, is expected to grow further as new commercial opportunities are unlocked by this agreement.

OneWeb was formed in 2012, and has been developing cutting-edge satellite technology from its bases both here in the UK and in the United States.

The UK government will have a final say over any future sale of the company, and over future access to OneWeb technology by other countries on national security grounds.