Competition aims to celebrate towns’ achievements, including in areas such as entrepreneurship, technology, community, enterprise, and integration 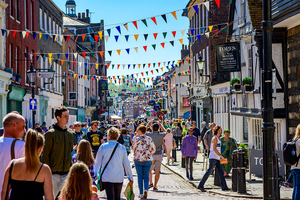 • Communities Secretary announces new Town of the Year competition to celebrate thriving towns
• New government focus on delivering for towns, with designated contacts to help people in every town and an expert panel to advise towns to plan and reach their best potential
• Work already underway to deliver 100 town deals as part of the £3.6 billion Towns Fund

Towns across England will be able to compete in a new Town of the Year competition, Communities Secretary Robert Jenrick announced today (9 January 2020), as he set out a new package of support to level up the country.

The new competition aims to celebrate towns’ achievements, including in areas such as entrepreneurship, technology, community, enterprise, and integration.

It will also support communities to come together to create a bright future and unleash their full potential through innovation, creativity, and community spirit.

A new ‘Towns Hub’ will also be established within the department to work directly with local people as they develop town investment proposals and help communities share best practice to transform their towns.

In the months ahead, the Communities Secretary will visit all of the 100 areas receiving funding under the £3.6 billion Towns Fund to set out the government’s ambition to restore the fabric of our towns and cities and give local people far more control in how they are invested in, and to hear directly from people in these communities on the specific support and investment they need.

"People have put their trust in this new government and we’re making an immediate start to serve local communities and deliver real change, through our £3.6 billion Towns Fund.

"I will visit all these areas in the coming months and make sure they’re receiving the practical support and investment they need on the ground.

"To celebrate the achievements of our towns, we are launching a national Town of the Year competition. These plans will help make this decade a time of renewal for towns and communities, delivering on the Prime Minister’s bold agenda for the future."

A new expert-led advisory panel will also be convened to advise on how to revitalise our towns over the next year. The specialists, including entrepreneurs and people who have delivered real change, will help shape government policy to support the growth agenda.

This comes as over £16 million of funding has been delivered to local authorities to help develop new innovative proposals in 100 areas across England, as part of the Towns Fund. Each place will have the opportunity to bid for funding of up to £25 million.

The ‘Towns Hub’ based across the country will work directly with the 100 places, with a named representative from the department supporting local people on the development of their plan.

They will also evaluate the emerging town investment plans, share best practice across towns and build on the Towns Fund investments for potential future support to towns from across government.

The Fund will allow the town’s future to be in the hands of local people, giving them a say in how this money is being spent by submitting ideas for how to improve skills and transport, create new jobs and regenerate their local community.

"As we move from a decade of recovery to a decade of renewal, we are doing everything we can to unlock the potential of towns across the North of England.

"Backed up with billions of pounds of extra investment, we are giving local people all the support they need to breathe new life into their town centres.

"Our plan to unleash the North’s potential will deliver real, visible change in local communities. With extra investment to drive economic growth and tax cuts for small businesses, we are a government on the side of the people as we work to build a truly Northern Powerhouse."

The competition will be launched later this year, and further details will be announced in due course.

See the 100 places being supported to develop Town Deals across England.

You can submit your ideas for how to improve skills and transport, create new jobs and regenerate your local community here: mytown.communities.gov.uk/

A total of 100 places – including 45 places across the Northern Powerhouse and 30 places in the Midlands Engine – will be the pioneers of new Town Deals building on the Prime Minister’s announcement in July of an additional £1.325 billion to support towns as part of a renewed vision to level up every part of our country, which took the total value of the Towns Fund to £3.6 billion.

Over £16 million of capacity funding has been shared across 100 places. Between £140,000 and £173,000 will help each of these areas develop long-term plans to bid for up to £25 million on making their town a better place to live and work.