Government unveils plans to restore 300,000 hectares of habitat across England

The new schemes will support nature recovery and climate action by rewarding farmers in their local area, alongside sustainable and profitable food production 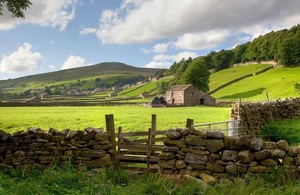 Schemes are designed to provide farmers with a range of options from which they can choose the best for their business now we have left the EU.

The Government has unveiled the next stages of its plan to reward farmers and landowners for actions which benefit the environment, supporting sustainable food production alongside vital nature recovery and work towards net zero.

Two new environmental land management schemes will play an essential role in halting the decline in species by 2030, bringing up to 60% of England’s agricultural soil under sustainable management by 2030, and restoring up to 300,000 hectares of wildlife habitat by 2042.

The Local Nature Recovery scheme will pay farmers for locally-targeted actions which make space for nature in the farmed landscape and countryside such as creating wildlife habitat, planting trees or restoring peat and wetland areas. The Landscape Recovery scheme will support more radical changes to land-use change and habitat restoration such as establishing new nature reserves, restoring floodplains, or creating woodland and wetlands.

Taken together with the previously announced Sustainable Farming Incentive which supports sustainable farming practices, they are designed to provide farmers and land owners with a broad range of voluntary options from which they can choose the best for their business. The reforms are the biggest changes to farming and land management in 50 years with more than 3,000 farmers already testing the new schemes.

Speaking at the Oxford Farming Conference today, Environment Secretary George Eustice will announce that applications will shortly open for the first wave of Landscape Recovery projects. Up to 15 projects will be selected in this first wave, focusing on two themes – recovering England’s threatened native species and restoring England’s rivers and streams.

These pilot projects alone are expected to deliver significant environmental benefits including:

• the creation of 10,000 hectares of restored wildlife habitat
• carbon savings between 25 to 50 kilotonnes per year – roughly equivalent to taking between 12,000 – 25,000 cars off the road
• improved status of around half (45-57%) of the most threatened species in England, including the Eurasian curlew, sand lizard and water vole

"We want to see profitable farming businesses producing nutritious food, underpinning a growing rural economy, where nature is recovering and people have better access to it.

"Through our new schemes, we are going to work with farmers and land managers to halt the decline in species, reduce our greenhouse gas emissions, increase woodland, improve water and air quality and create more space for nature.

"We are building these schemes together, and we are already working with over 3,000 farmers across the sector to test and trial our future approach. Farmers will be able to choose which scheme or combination of schemes works best for their business, and we will support them to do so."

Farming in England is moving away from the arbitrary land-based subsidies and top-down bureaucracy of the EU’s Common Agricultural Policy, towards schemes that recognise the work that farmers do as stewards of the natural environment. Defra is working in partnership with farmers to design the new schemes and support the choices that they make for their own holdings.

Local Nature Recovery is the improved and more ambitious successor to the Countryside Stewardship scheme in England. It will reward farmers taking action at a local level and working together to tackle issues such as water pollution by reducing run-off, mitigating flood risk by installing flood reservoirs, restoring peat or wetland areas, and adding trees and hedgerows to fields.

An early version of the Local Nature Recovery scheme will be trialled in 2023 with a full roll-out across the country from 2024.

"Collectively, these schemes mark an historic shift in the way we manage our land, setting us on course toward the production of sustainable food at the same time as rising to the urgent task if halting and reversing the decline of Nature.

"More than two thirds of England is farmed and these reforms pave the way for those who manage the land to produce healthy food alongside other vital benefits, such as carbon storage, clean water, reduced flood risk, thriving wildlife and beautiful landscapes for everyone to enjoy.

"At Natural England we look forward to working with the government to breathe life into England’s Nature Recovery Network, including through the very exciting ambition to create large scale Landscape Recovery Areas."

By 2028, Government spending is expected to be evenly split across farm-level, locally tailored, and landscape-scale investment. All schemes will be designed to pay for public goods which go above and beyond regulatory baselines and the schemes won’t pay for the same actions twice.

All the environmental schemes will be voluntary and it will be for farmers to decide what combination of actions is right for them. Defra is designing them to be accessible, supportive and with fair compensation to incentivise high levels of uptake. The scheme will be adjusted and expanded as the pilots continue. The aims of the schemes will also be kept under review as long-term, legally binding targets are developed under the Environment Act.