The money will be spent on widening bridges, building roads and connecting utilities so up to 8,500 properties can be built 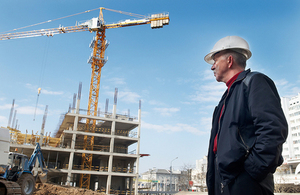 • Government will spend £95 million in Woking and £47 million in Truro to deliver thousands of extra properties.
• New funding is part of the government’s drive to hit 300,000 new homes a year target.

Thousands of homes will be built in growing communities as a result of a £142 million investment in infrastructure, the Housing Minister Kit Malthouse MP confirmed today (11 June 2019).

The money will be spent on widening bridges, building roads and connecting utilities so up to 8,500 properties can be built.

The spending, under the Housing Infrastructure Fund, is all part of the government’s drive to deliver 300,000 homes a year by the mid-2020s.

"For decades, governments of all stripes and types have not built enough new homes but we are turning that around, brick by brick.

"We are driving to create homes, opportunities and thriving communities – and this £142 million investment will mean we can build more of the properties our country so badly needs.

The funding confirmed today comes from the government’s £5.5 billion Housing Infrastructure Fund so that land can be made ready for development.

Money is allocated to authorities after a competitive funding allocation process.

Government will invest £95 million in Woking, Surrey, which will unlock land to build up to 4,500 homes in the town.

The money will pay to widen the Victoria Arch Bridge, to pay for road improvements, buying land and connecting utilities.

The project, which is being delivered by Surrey county council, is expected to significantly reduce congestion in the area, as well as opening up land for housing.

An extra 4,000 homes will be built as a result of a £47 million investment in new road links in Truro, Cornwall.

The funding will be spent on a new northern access road, connecting sites from the A390 in the west to the Royal Cornwall Hospital and employment hub in the east.