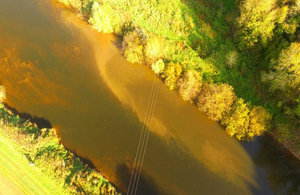 Environment Agency Chair, Emma Howard Boyd has called on water companies and farmers to cut the amount of pollution incidents harming England’s waters and for penalties to be made tougher, as the EA publishes The State of the Environment: Water Quality report today.

The report shows that water quality has improved markedly over the last 30 years, following more than a century of poorly regulated industrial practices. England has the cleanest bathing waters since records began and rivers that were biologically dead are reviving. But there is more work to do to achieve the Environment Agency’s ambition of a cleaner, healthier and better managed water environment

"Water quality is better than at any time since the Industrial Revolution thanks to tougher regulation and years of hard work by the Environment Agency and others.

"But there are still far too many serious pollution incidents which damage the local environment, threaten wildlife and, in the worst cases, put the public at risk.

"I would like to see fines made proportionate to the turnover of the company and for the courts to apply these penalties consistently. Anything less is no deterrent."

The report reveals that the Environment Agency has taken more than 50 million samples to monitor water quality over the past 20 years. In 2016, 76% of the tests used to measure the health of rivers were rated good. However, only 14% of rivers reached good ecological status overall – this is because the failure of one test means the whole water body fails to obtain good or better status.

The most common reason for rivers not achieving good status was phosphorus, which produces algae and depletes oxygen. More than half of rivers have been found to have unacceptable levels of phosphorus, caused by sewage effluent and pollutants from farmland.

The report also states that groundwaters have been deteriorating in quality over the last 60 years with only 53% achieving good chemical status in 2016.

Defra’s 25-year environment plan sets out a challenge to improve at least three quarters of waters so that they are close to their natural state. The report identifies population growth, climate change and plastic pollution as some of the potential threats to water quality in future.

It calls on businesses and the public to do more to protect the environment by disposing of household chemicals responsibly, not putting fats and oils down the drain, and minimising use of single-use plastics.

Read the State of the Environment: Water Quality report