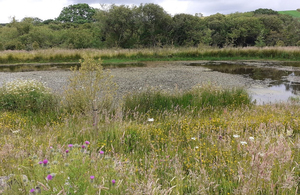 The company, responsible for England’s major A roads and motorways, has secured over £¾ million to work with Cornwall Wildlife Trust to deliver environmental and biodiversity schemes bordering the A30 in mid-Cornwall.

As part of its Designated Funding programme, National Highways has confirmed £785,000 from its Environment and wellbeing fund for the Trust to restore and recreate 16.8 hectares of woodland, orchard, grassland and heathland around Ladock to Gwills and Benhaven to Lambourne Mill, north of Truro.

The Environment Agency is also providing £50,000 towards the ‘green ribs’ projects, which will help to tackle decreasing biodiversity within the county by:

"It’s great to see Government money invested in boosting biodiversity in our beautiful Cornish countryside, alongside delivering these vital upgrades as we build on our commitments to build back both better and greener from the pandemic."

"We’re pleased to announce this additional funding for further environmental projects around the location of the scheme, and working with our partners on various enhancements which will bring long-lasting benefits for Cornwall.

"We’re delighted to be working with Cornwall Wildlife Trust and Cornwall Council on these projects – a glowing example of how this funding and partnership working can make life better for communities, wildlife and the environment around our roads.

"We’re really proud of the work we’re undertaking to protect and enhance the ecology and environment in the area, and we’re currently forecasting a net gain of over 10% in biodiversity as part of the work we’re doing on the A30 Chiverton to Carland Cross scheme in the county.

"The design of the road scheme is also being carried out in the most sympathetic way for both local people, the travelling public, wildlife and the environment."

The ‘green ribs’ work, to take place in the second roads investment period up to 2025, builds on previous design and construction work within the first roads investment, particularly between Benny Mill and Boswiddle.

Cornwall Council and Natural England jointly funded initial technical work ahead of the National Highways investment and the council has also been steering development to align with its nature recovery, climate resilience and Forest for Cornwall ambitions.

"Cornwall Council has declared an ecological emergency in a bid to tackle the decline of wildlife and nature, which works alongside the plan to help Cornwall become carbon neutral by 2030.

"This project showcases how responding to the ecological emergency is best served by close partnerships to ensure that the recovery of nature is prioritised alongside efforts to reduce impact on the climate."

"This is helping restore biodiversity and also allows neighbouring landowners to have a combined positive impact in the long term. This is a key part of the Trust’s strategic plan for at least 30% of Cornwall’s land and sea to be connected, recovering and protected for nature by 2030."

National Highways manages four designated funds, allocated by the Government, to deliver benefits above and beyond building, maintaining and operating England’s strategic roads.

From protecting the environment and enhancing the landscape around roads, to improving safety, reducing congestion, and supporting communities, the aim is to make a positive difference to people’s lives.

The A30 Chiverton to Carland Cross scheme has also been designed to protect the environment and as part of construction, a total of 33 multi-species crossing points, including a ‘green bridge’ at Marazanvose, are being constructed to assist the habitats and journeys of animals such as otters, badgers, bats and reptiles.

The scheme will also see over 28 miles of new drainage to protect the local area and water courses, new filtration ponds, native tree planting, the creation of new landscape boundaries and the construction of earth barriers and sound-absorbing fencing.

Further information on environmental mitigation and other details are available on the A30 Chiverton to Carland Cross scheme webpage.

Read more information on funded projects around the A30 upgrade.