Vulnerable children to get better support when moving school

Proposals outlined to reduce time vulnerable children spend out of the classroom, with consultation launched on changes to the School Admissions Code 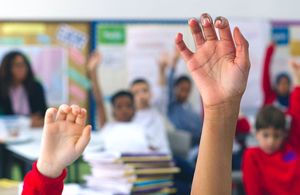 Vulnerable children are to receive improved support when moving school during term time, in new measures to reduce time spent out of the classroom.

Proposed changes to the School Admissions Code outlined today (26 June) include a new turnaround of 10 school days for a decision on an in-year application and clearly defined timescales for each stage of the process.

While these measures will apply to all children moving school during the academic year, including those of Armed Forces Personnel, vulnerable children and those in care are much more likely to move school outside of the usual timeframes.

There will also be greater clarity for parents or carers on how applications can be made during term time, how the council or admissions authority will handle requests and how decisions can be appealed.

The code is also being amended to prioritise children adopted from state care outside of England and make sure they benefit from the same experience and opportunity in accessing a school place as those adopted domestically.

"We remain determined to support the most vulnerable pupils to reach their potential in school and beyond, which is why we are aiming to reduce the time spent outside the classroom when a child needs to move school during term time.

"These changes aim to speed up the process for vulnerable pupils and make it easier to secure a school place when they need one, as we continue to focus on delivering more good school places for pupils and parents."

The proposals are now open for an extended consultation period of sixteen weeks to ensure schools, local authorities, parents, social workers and charitable organisations have sufficient opportunity to submit their responses.

"In-year admissions and the Fair Access Protocol are relied upon by thousands of children each year and they are often doubly vulnerable - not only are they between school places and therefore out of education, but there is often an underlying contributor to this. Children might be new to the country or have been recently re-housed and those who come before Fair Access panels might have been excluded or have unmet needs.

"Providing greater consistency for these children, whilst allowing a diverse system of admission authorities to collaborate according to local needs, is a timely and important step forward in ensuring equity for the children who need it most."

"I am sure that local authorities will welcome the review of the School Admissions Code which will look to provide a more robust framework for in-year admission and Fair Access Protocols.

"Such changes have the potential to really help local authorities advocate for vulnerable children and families more effectively."