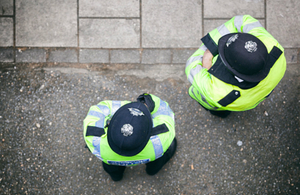 A former Chief Constable with more than 30 years’ experience in front-line policing has been appointed by Home Secretary Priti Patel to challenge and support the Home Office as it recruits 20,000 extra officers, tackles violent crime and restores public confidence in the criminal justice system.

Michael Fuller, who has been appointed as a non-executive director of the Home Office, is also keen to help the department increase diversity in the police and to implement the recommendations of the Wendy Williams Lessons Learned Review following Windrush.

Mr Fuller QPM became the first black officer to be appointed Chief Constable when he took over Kent Police in 2004. As a police officer, he was instrumental in setting up the Racial and Violent Crime Task Force, drew up the Metropolitan Police action plan in response to the Macpherson Inquiry, and established and led Operation Trident, successfully reducing gun crime in London. Mr Fuller, a qualified barrister, later served as HM Chief Inspector of the Crown Prosecution Service.

He is one of five new non-executive directors who will work closely with ministers and officials to support the delivery of the department’s commitments. The appointees have a vast amount of private sector and commercial experience:

"Our new non-executive directors will have an important role to play in helping the Home Office deliver for the public - from recruiting 20,000 extra police officers and tackling serious violence to righting the wrongs of Windrush and implementing a new points-based immigration system.

"They bring with them a wealth of experience and expertise from outside government, including careers in frontline policing and leading multinational companies, and I am looking forward to working with them all."

"I’m delighted to welcome our new non-executive directors to the Home Office. Their experience, insight and knowledge will be of great value to the department as we work together to achieve our objectives."

"I know first-hand the challenges the police face in their difficult task of keeping the public safe. I hope to use my operational experience and knowledge of the criminal justice system to scrutinise the Home Office and help the department deliver its commitments, which includes recruiting extra officers, ensuring forces better represent the communities they serve and making sure the police have the support they need."

Non-executive directors are an essential part of the board as they bring constructive challenge and advice to the department’s work through a fresh, independent, and external perspective. NEDs will have experience of managing large or complex organisations and projects.

Michael is the former Chief Constable of Kent Police with more than 30 years’ experience in frontline policing. When he retired, Kent Police was designated by the Police Inspectorate as one of five most improved police forces in England and Wales. For distinguished police service Michael was awarded the Queens Police Medal (QPM). When Michael retired from the police in April 2010, he took up the position of Her Majesty’s Chief Inspector of the Crown Prosecution Service. Michael is also a qualified barrister.

Jan is already an advisor to several Government departments, including the Home Office and Ministry of Justice. Prior to her current portfolio, Jan was a successful management consultant for 25 years, as a Partner at PwC Consulting and then as a senior leader at IBM UK, where she led many large-scale delivery programmes for public sector clients. She is passionate about the value of diversity in business and was the IBM UK leadership team’s sponsor for people with disabilities. Jan will start her appointment as a NED in February 2021.

John has extensive international board and leadership experience. He has been the Chief Executive of several media companies, most notably he was the founder and Chief Executive of Digital First Media - the second biggest newspaper group in the USA at the time. He is currently the Chair of the Evening Standard and the Independent as well as a Member of the Investment Committee of Pembroke VCT plc. Through his firm IVA Ventures, he is an investor and advisor in a number of digital start-ups in Silicon Valley, the United Kingdom and Europe.

Since 2013, Tim has been Chief Executive of LGC, an international Life Sciences company headquartered in London. Tim has followed an international career in the technology and science sectors, spanning engineering, marketing and corporate leadership. Following a decade with IBM in UK and Asia, he held senior executive positions in Thales and Silicon Graphics, prior to being CEO for Xafinity and subsequently Talaris. Tim has previously been a UK government NED at UKTI and DFID.

During a 32 year career at Accenture, Phil specialised in the design and delivery of large IT systems as well as the management of outsourcing operations. As Partner, he was part of the Accenture global management team within two global operating groups, government and communications, and media and technology. He has a particular skill in looking at problems and projects from very different angles to deliver innovative solutions quickly and specialises in turning around challenging and complex programmes.