Funds allocated to deliver up to 200,000 new homes in garden towns and villages and for councils to support new neighbourhood plans 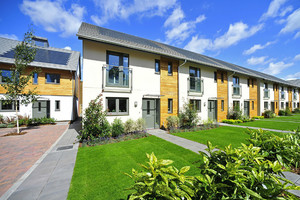 Communities across England are set to benefit from thousands of new, better-designed homes thanks to an £8 million cash boost, Housing Minister Rt Hon Esther McVey MP has announced today.

A total of £6 million will be allocated to help new locally-led garden towns and villages progress plans to deliver up to 200,000 new homes.

An additional £1.9 million will be given to councils in England to support new neighbourhood plans, allowing communities to get involved and have their say on the types of homes that are built and where.

Neighbourhood planning has been incredibly popular at the local level since it was introduced it in 2011 with nearly a million votes cast for neighbourhood plans and over 2,600 different communities coming forward with proposals.

Today’s funding allocation builds on the government’s commitment to giving communities a voice on the development in their areas, including prioritising local brownfield land while protecting the green belt.

"Communities have the local insight to decide what new homes should look like and the kind of infrastructure they need in their area. This is what neighbourhood planning is all about, so I’m pleased this funding will ensure that the right homes are built in the right places.

"I am also announcing extra cash to deliver new vibrant garden communities, which will help deliver tens of thousands of well-designed new homes for hardworking families."

Twenty one garden towns and villages already in the pipeline across England will receive a share of £6 million to progress their proposals towards delivering up to 200,000 new homes.

The cash injection will mean homes get built that otherwise would not. This is because it will be used for preparing environmental assessments and using the latest design techniques to develop areas people will be proud to be a part of.

The latest new garden community to receive backing from the government will be built at Wynyard, which has already received £150,000 and will make it the largest new settlement in the North East, delivering up to 6,800 new homes.

"I am delighted that this funding has been approved and it is another example of the government’s commitment to projects in the Tees Valley – they are supporting my ambition to make our region a better place to live and work.

"The proposed garden community will take more pressure off nearby developments when it comes to excessive building which is changing the character of our villages and towns for the worse and proving to be a real headache for residents. This announcement is more evidence that this government is listening to the concerns of people in this region and acting upon them."

• Neighbourhood plans are led by community volunteers and parish councils, covering individual neighbourhoods and villages, and are supported by their local planning authority.