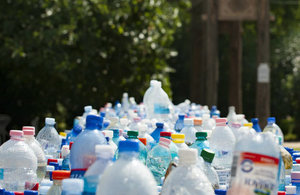 As the government announces a deposit scheme to encourage people to recycle plastic bottles and cans, GLD lawyers have been doing their bit to help stem the mounting volume of plastic waste that is posing a threat to much of the world’s wildlife.

Brought into focus by the recent series Blue Planet II in which David Attenborough highlighted the toxic effect of plastic waste on the world’s oceans, government lawyers from Defra Legal Advisers have joined a global effort to curb pollution.

Gilly Stratford of GLD was part of the UK delegation that joined the third United Nations Environmental Assembly which took place recently in Nairobi, otherwise known by its more snappy acronym UNEA-3.

UNEA-3’s aim was to work towards ridding the planet of pollution, including the menace of marine plastic litter. At the end of long and intense negotiations, 15 anti-pollution measures were unanimously agreed by the 190+ countries which attended. Gilly’s role was to advise policy colleagues and help draft amendments to the texts, while keeping an eye on the UK’s negotiating position.

While these measures are not legally binding, they nonetheless send out a statement of intent. Defra achieved all its objectives at UNEA-3, especially its main aim to reduce marine pollution by plastics and microplastics.