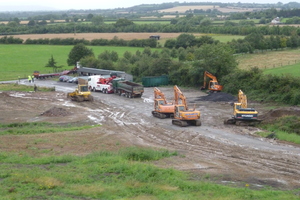 Officers from the Environment Agency’s Environmental Crime Team, along with Warwickshire police officers, seized 5 vehicles from a farm field near Stratford-upon-Avon on Wednesday 14 August.

The vehicles seized were three 360 degree diggers, a large bulldozer type digger and an HGV tipper truck. It is believed the vehicles were being used to dump and spread large volumes of contaminated soil at a non-permitted site.

"This sends out a strong message that we will use all our powers possible to stop waste crime which harms the environment, wildlife and the community, as well as undermining the work of companies that operate legitimately. We are now continuing our investigations into alleged activities at the farm.

"Landowners should take extra care when agreeing to the spreading of materials on their land. There are tight controls on what is allowed and illegal dumping of contaminated materials on farmland can create a significant liability for removal as well as seriously degrading the quality of the soil. In some cases the cost of removing waste can be higher than the original land value."

The owners of the vehicles now have until 6 September 2019 to claim to have the vehicles returned to them by the Environment Agency. If no legitimate claim is made, the vehicles will be sold or crushed.

Members of the public can report illegal waste activity anonymously to Crimestoppers on 0800 555 111 or via the online form.