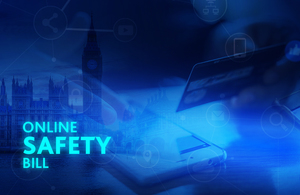 Social media sites and search engines will be forced to stamp out fraudsters and scammers on their platforms as the government strengthens its pioneering internet safety laws.

The move comes as the government also launches a consultation as part of a wider overhaul of how online advertising is regulated in the UK, including proposals to improve transparency and accountability and tackle harmful, fraudulent and misleading adverts.

Together the measures aim to boost people’s trust and confidence in being online by making sure the UK’s rules and regulations keep pace with rapid advances in technology.

A new legal duty will be added to the Online Safety Bill requiring the largest and most popular social media platforms and search engines to prevent paid-for fraudulent adverts appearing on their services.

The change will improve protections for internet users from the potentially devastating impact of fake ads, including where criminals impersonate celebrities or companies to steal people’s personal data, peddle dodgy financial investments or break into bank accounts.

Separately, the government is launching a consultation on proposals to tighten the rules for the online advertising industry. This would bring more of the major players involved under regulation and create a more transparent, accountable and safer ad market.

Harmful or misleading adverts, such as those promoting negative body images, and adverts for illegal activities such as weapons sales, could be subject to tougher rules and sanctions. Influencers failing to declare they are being paid to promote products on social media could also be subject to stronger penalties.

"We want to protect people from online scams and have heard the calls to strengthen our new internet safety laws. These changes to the upcoming Online Safety bill will help stop fraudsters conning people out of their hard-earned cash using fake online adverts.

"As technology revolutionises more and more of our lives the law must keep up. Today we are also announcing a review of the wider rules around online advertising to make sure industry practices are accountable, transparent and ethical - so people can trust what they see advertised and know fact from fiction."

"Crimes like romance and investment fraud leave lifelong scars on their victims and can completely destroy their finances and ability to trust. Organised crime groups have discovered new ways to take full advantage of people, using increasingly sophisticated methods which would trick even the most scrupulous of individuals.

"We know that these crimes are on the rise and with all of us spending longer online, criminals are spotting their opportunities to abuse people’s trust and trick them more and more.

"The changes that we are announcing today mean that online and social media companies will have to acknowledge these issues and take robust action to combat the scourge of online fraud, and take more responsibility to protect their users from this high-harm crime. Innocent victims must not be taken advantage of and conned online by fraudsters."

Martin Lewis, founder of MoneySavingExpert.com and the Money and Mental Health Policy Institute, whose face is among the most used by scammers in the UK, said:

"I am thankful the Government has listened to me and the huge numbers of other campaigners – across banks, insurers, consumer groups, charities, police and regulators – who’ve been desperate to ensure scam adverts are covered by the Online Safety Bill. We are amidst an epidemic of scam adverts. Scams don’t just destroy people’s finances – they hit their self-esteem, mental health and even leave some considering taking their own lives.

"The Government now accepting the principle that scam adverts need to be included, and that firms who are paid to publish adverts need to be responsible for them, is a crucial first step. Until now, only user-generated scams were covered – which risked pushing more scam ads, incentivising criminals to shift strategy. Yet it is a complex area. Now we and others need to analyse all elements of this new part of the Bill, and work with Government and Parliament to close down the hiding places or gaps scammers can exploit."

"We welcome that the Online Safety Bill will now require the largest platforms to tackle fraudulent advertising. We have been clear about the need for legislation and appreciate the Government’s positive engagement on this. We look forward to working closely with the Government and regulatory partners as they finalise and implement the details of the draft Bill."

Under the current draft of the Online Safety Bill, search engines and platforms which host user-generated content, video-sharing or live streaming will have a duty of care to protect users of their services from fraud committed by other users. This includes ‘catfishing’ romance scams and fake stock market tips - posted by people in images, comments or videos.

Today the government is adding a new duty to the bill which will bring fraudulent paid-for adverts on social media and search engines into scope, whether they are controlled by the platform itself or an advertising intermediary.

These companies will need to put in place proportionate systems and processes to prevent (or minimise in the case of search engines) the publication and/or hosting of fraudulent advertising on their service and remove it when they are made aware of it.

It will mean companies have to clamp down on ads with unlicensed financial promotions, fraudsters impersonating legitimate businesses and ads for fake companies. It includes ‘boosted’ social media posts by users which they pay to have promoted more widely.

The regulator Ofcom will set out further details on what platforms will need to do to fulfil their new duty in codes of practice. This could include making firms scan for scam adverts before they are uploaded to their systems, measures such as checking the identity of those who wish to publish advertisements, and ensuring financial promotions are only made by firms authorised by the Financial Conduct Authority (FCA).

Ofcom will oversee whether companies have adequate measures in place to fulfil the duty, but will not assess individual pieces of content, in keeping with the approach taken in the rest of the bill. It will have the power to hold companies to account by blocking their services in the UK or issuing heavy fines of up to £18 million or ten per cent of annual turnover.

The government is today launching a public consultation on its Online Advertising Programme (OAP).

The content and placement of online advertisements is currently overseen by the Advertising Standards Authority (ASA) under a system of self-regulation. But rapid technological developments have transformed the scale and complexity of online advertising leading to an increase in consumer harm.

Adverts seeking to defraud such as investment scams and promotions for fraudulent products and services including fake ticketing, which in many cases involves fake celebrity endorsement, have proliferated online.

People are also being targeted through legitimate-looking adverts that contain hidden malware. When clicked on they allow hackers to commit malicious cyber security attacks such as ‘cryptojacking’ - the unauthorised use of people’s devices to mine for cryptocurrency.

Elsewhere there is evidence of online adverts selling items prohibited in UK law, such as prescription medicines and counterfeit fashion, misleading adverts misrepresenting the product or service they offer, and influencers failing to reveal sponsorship arrangements with companies in their posts.

The programme will look at the current regulations and regulators including whether they are properly empowered and funded. It will consider the whole supply chain and whether those within it should do more to combat harmful advertising, including ad-funded platforms such as Meta, Snap, Twitter and Tik Tok and intermediaries such as Google, TheTradeDesk and AppNexus.

Options include strengthening the current self-regulation approach or creating a new statutory regulator with tough enforcement powers including: