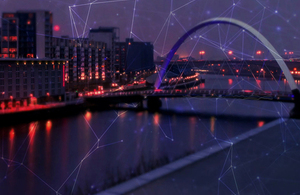 Scotland’s biggest city is to reap benefits worth nearly £150 million. It follows a £24 million investment from the UK government into digital infrastructure and open data, making Glasgow a world-leading smart city.

The £24 million invested in the city since 2013, through Innovate UK, funds projects that connect the city together and help Glasgow save money and energy and develop the technologies of the future.

Speaking from the City Operations Centre in Glasgow, which has benefited from Innovate UK’s funding, Scottish Secretary, David Mundell said:

"This fantastic return on investment demonstrates that targeted funding from the UK Government can lead to great results, benefiting businesses, visitors and communities.

"Projects funded through this program demonstrate the innovative ways that modern technology and data can be used to make a tangible difference to the lives of people in cities across the world."

Projects funded so far have reduced energy costs in the city through intelligent street lights that adapt to people’s activity; created apps that give visitors and residents the open to plan their routes; and combined multiple separate city systems to allow teams to work on projects that cross multiple different disciplines.

These projects include an:

• intelligent street lighting demonstrator, which showed how the city can use smarter streetlights to improve lighting quality, reduce energy usage and make maintenance more efficient. The pilot scheme also collected useful data that could have a positive impact on the quality of life and public safety in the 2 test locations, Riverside Walkway and Gordon Street, such as noise detection, movement detection, air pollution detection and WiFi service

• active travel demonstrator, which showed how the city could be made friendlier for both cyclists and pedestrians. It has the potential to inform strategies that could help Glasgow reach the Scottish Government target of 10% of all journeys being completed by bike

• integrated social transport demonstrator, which helped some of Glasgow’s most vulnerable citizens access social and educational services. Smart integration and route scheduling software will increase flexibility and responsiveness, while also reducing operational costs and making it easier for the same transport to be used across various organisations