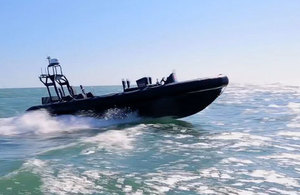 An autonomous vessel moving on the water.

Britain’s maritime industry is on the verge of a technological revolution that could make shipping faster, safer and more environmentally friendly, the Transport Secretary will say today (28 February 2018).

Chris Grayling will outline his vision for the UK to be at the forefront of a maritime technology revolution which is expected to result in the growing use of autonomous vessels.

The Transport Secretary’s comments come after the addition of the first semi-autonomous vessel to the UK Ship Register at the end of last year, marking the start of a potential revolution in the maritime industry.

And the potential advances tie in with the ambition set out in the government’s Industrial Strategy to put the UK at the forefront of the industries of the future.

Chris Grayling will be joining representatives from across the maritime industry today at the Smart Shipping Event in the UK, to discuss advances in the industry.

Autonomous vessels are just one example of exciting developments which could deliver huge benefits to the maritime industry. Other examples include:

• augmented reality, which could be used to train new seafaring cadets and familiarise them with vessels before they have even left the shore, improving safety
• artificial intelligence, which could plot more efficient routes, avoid severe weather, highlight disruption at ports and diagnose mechanical problems
• a rise in the number of electric and hybrid vessels, cutting down on the level of carbon emissions in the industry, and the development of low or zero emission fuels
• magnetic berthing, making the mooring process safer and more efficient

"Autonomous shipping is just one aspect of a maritime technology revolution which has the potential to radically transform the industry, making it safer, cleaner and faster than ever.

"As a country with a proud maritime history, the UK is absolutely determined to be at the forefront of this exciting time of change in the industry.

"We are already working with the International Maritime Organization to pave the way for this new era of shipping and we want to work closely with the industry to ensure we are doing everything possible to allow this new technology to thrive."

An industry-led code of practice for autonomous vessels was published in November of last year by Maritime UK, the same month in which the C-Worker 7 became the first semi-autonomous vessel to join the UK Ship Register.

As with incidents on the road, the majority of casualties at sea are estimated to be caused by human error. The use of new technology which can help seafarers and the emergence of autonomous shipping has the potential to improve safety at sea.

And autonomous shipping could see a change in how freight is transported around the country, with coastal shipping replacing some heavy goods vehicles, taking them off the roads and reducing congestion.

Equally, the potential radical redesigns of vessels which technology could allow, and prospect of more hybrid and electric vessels coming into use, could significantly reduce carbon emissions.

The Transport Secretary’s words follow the announcement of plans for the Maritime 2050 project earlier this month.

The event in London will also be hosted by Shipping Minister Nusrat Ghani and bring together attendees with a wealth of maritime expertise to assess how best to maximise the benefits of technology for shipping.

Small and medium-sized enterprises, ship owners, port operators, trade bodies, lawyers and academia will discuss what they see as the opportunities and challenges involved.