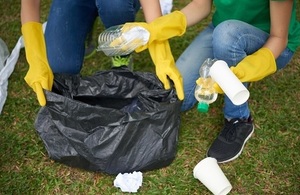 Over £300,000 is now available for community projects that get tough on litter, Environment Minister Thérèse Coffey has announced today (15 August 2018).

The first round saw a number of councils, charities, businesses, and public projects awarded almost £125,000 to take innovative steps to tackle littering in their communities. The successful projects included measures to tackle littering by football fans, and working with hauliers and business owners to reduce roadside litter.

As part of the Fund, Defra is also preparing to launch a ‘digital innovation challenge’ to help find innovative digital and technological solutions to local litter challenges. We have already seen mobile apps like LoveCleanStreets, “Littergram” or “Find it Fix It Love It” showcase digital and technological solutions to help people report litter problems and see a speedy resolution.

The funding builds on the Government’s wider Litter Strategy for England, as well as the recent launch of the 25 Year Environment Plan setting out how Government will protect and enhance our natural environment. 10% of the fund is entirely dedicated to preventing marine litter.

"This Government is tough on tackling litter which if left unchecked makes our towns and cities less pleasant places, poisons our wildlife, and blights our countryside.

"That is why we are providing grants of up to £10,000 for communities to come up with creative solutions to tackle litter in their local area and I encourage local groups to apply.

"It is only through government and communities working together that we will affect the long-term behavioural change that is needed to tackle this scourge, and leave the environment in a better state than we inherited it."

"We are determined to make our cities, towns and countryside greener, cleaner and tidier environments for all.

"Brilliant ideas to make that happen were realised with the first round of funding. Now, we’re looking for people to come forward with inventive and impactful projects to build on that and our wider strategy to substantially reduce litter."

"Innovation is a vital part of turning the tide on litter. We need to find new ways to change the behaviour of those who think it is OK to drop their rubbish on the ground and new solutions that make it easier for people to do the right thing.

"It is fantastic to see the Government supporting innovation through this scheme, which is helping organisations and communities develop exciting new ideas and approaches, and at Keep Britain Tidy we are delighted to be receiving funds to enable us to test new behavioural interventions through our award-winning Centre for Social Innovation."

Keeping the country’s streets clean cost local Government almost £700 million last year. Much of this is avoidable litter, and money that could be better spent in the community. Despite this, a worrying 1 in 5 people admit to dropping litter, with a recent study showing 1 in 4 people admit to ‘careful littering’ such as leaving drinks cans or coffee cups on window ledges.

Government has recently announced a range of new measures to get tough on litter including almost doubling on-the-spot fines for litter louts, and new penalties for littering from vehicles, making the keeper of the vehicle responsible even if it isn’t possible to identify precisely who threw the litter.

The UK continues to be a global leader in tackling waste, recently announcing a world-leading ban on microbeads, and proposals to extend the 5p plastic bag charge. Government has also recently announced an intention to ban the sale of plastic straws, stirrers and cotton buds, plans for a deposit return scheme to increase recycling rates of drinks bottles and cans, and launched a call for evidence on using the tax system or charges to address single-use plastic waste.

• The Litter Innovation Fund was set up as part of the Government’s Litter Strategy for England which was launched in April 2017 and is administered by the sustainability not-for-profit WRAP. A total of £450,000 is available for funding to local projects.

• The funding is evenly provided by the Department for Environment, Food & Rural Affairs and the Ministry for Housing, Communities and Local Government and funding awarded is limited to a maximum of £10,000 per project. Projects must also secure match-funding.

• The cost of £682m in 2016/17 for street cleaning is from Official local Government returns to DCLG.

• Further information on the Litter Innovation Fund is available on the WRAP website.

• Research on one in five admitting to having dropped litter in the past is from Keep Britain Tidy - Litter Droppers Segmentation research (2010).

• Research on 27% of people admitting to ‘careful littering’ is from a poll by YouGov for Keep Britain Tidy (2018).

• Results from the first round of projects will be published in due course.