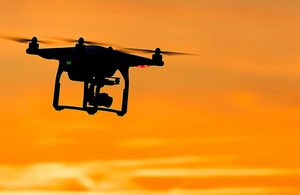 • Air Traffic Management and Unmanned Aircraft Bill has first reading in Parliament
• the bill will grant police new powers to tackle misuse of unmanned aircraft such as drones
• the bill will also give the Transport Secretary new powers to modernise airspace, reducing noise and emissions, and improving passenger services

The government has introduced the Air Traffic Management and Unmanned Aircraft Bill to modernise airspace and tackle illegal use of unmanned aircraft.

The bill will grant the Transport Secretary new powers to ensure that airports modernise their airspace, and fine those that don’t implement changes quickly enough.

"Modernising the use of airspace will allow us to generate lower CO2 emissions from aviation, reduce noise for those near flight-paths and improve punctuality for passengers.

"Drones have great potential to transform how we move people and goods, and could help save lives in search and rescue missions. This new bill will help us ensure that drone technology is used safely."

The legislation is a key part of the government’s approach to drones, which will ensure individuals, businesses and emergency services in the UK can continue to harness the economic and social benefits of drones, while cracking down on misuse and disruption.

The proposals will also award more power to the Transport Secretary, to boost aviation infrastructure, helping to deliver quicker, quieter and cleaner journeys.