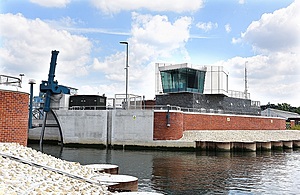 The £67.4 million Ipswich tidal flood barrier is just one of the many flood schemes which has been completed during the government's current capital investment programme. The scheme protects 1,600 homes and 400 businesses from tidal flooding.

With the fifth wettest autumn ever recorded, rainfall records broken across England and the major storms Ciara and Dennis striking the UK in February, this winter saw the devastating impacts that severe weather can bring. The exceptionally wet weather saw thousands of homes flooded and lives disrupted in communities up and down the country. Since then the government has been working flat out alongside the Environment Agency and local authorities to get people back into their homes as quickly as possible.

The government recently announced a further £120 million to conduct repairs and bolster defences that were flooded this winter, and £200m to help more than 25 local areas develop innovative actions that improve their resilience to flooding.

From 2015 onwards, the government has been investing £2.6 billion to better protect the country from flooding. This investment is currently delivering over 1,000 flood and coastal defence schemes to better protect 300,000 homes across England, providing greater certainty and protection for those who live in areas at risk of flooding.

However, is it clear that the twin pressures of climate change and population growth mean that more needs to be done. That is why in the 2020 Budget, the government announced that it will double its investment in flood and coastal defences in England to £5.2 billion over the next six years. This will ensure that a further 336,000 homes and non-residential properties such as businesses, schools and hospitals are better protected from flooding and coastal erosion.

In addition to doubling its spending on flood and coastal defences, the government has worked with the Environment Agency to update how the level of government funding is allocated to projects.

The changes will take account of the wider environmental and social benefits that come with reducing the risk of flooding.

The changes will include:

• updated payments to account for inflation and based on new evidence on the overall impacts of flooding, such as mental health
• increased payments for flood schemes which also create a range of environmental benefits
• more funding for flood schemes which also protect properties that will later become at risk of flooding due to climate change
• a new risk category which will enable schemes that prevent surface water flooding to qualify for more funding

Each of these changes, which will apply to all new schemes from April 2021, will mean that we better recognise the full range of benefits that flood schemes can bring. They are also likely to mean that more schemes will qualify for increased levels of government funding.

These changes will ensure that government flood defence spending is prioritised to where it will achieve the best outcomes, will encourage defences that are fit for the future and will continue to incentivise financial contributions from others who have a part to play.

Building on these changes, later this year, Defra will be launching a public consultation on floods funding policy to gather insights from across the country. These views will help to further develop our floods funding vision for the future. More information on the consultation and details of how you can take part will be made available in due course.

• The Environment Agency has produced a new 2020 Partnership Funding calculator and Outcome Measure guidance to enable practitioners to determine their eligibility for government funding for project proposals.

• There are transition arrangements during the financial year 2020/2021.