New Traffic Commissioners to be appointed 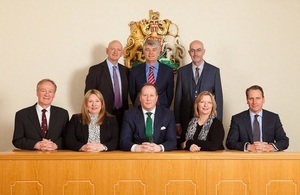 This follows the decision by Simon Evans to step down from the role of North West traffic commissioner and the retirement of Nick Jones from the Welsh role on reaching the statutory retirement age.

“After 27 most illuminating and fulfilling months in the position of TC for the North West, I have decided to step down from my full time responsibilities. I am though most grateful to be afforded the opportunity to revert to being a DTC, and to maintain an active regulatory role, whilst achieving the work/life balance that I now desire.”

Nick Jones will also continue to fulfil the role as a Deputy Traffic Commissioner.

The Traffic Commissioners for Great Britain wish to thank both for their services and look forward to working with them in their new roles.