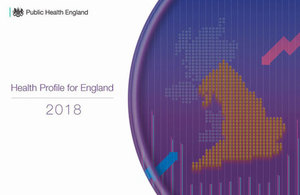 As a society, people are living longer – life expectancy in England has reached 79.6 years for men and 83.2 for women and we’re healthier at every age group than ever before. However, stubborn inequalities persist – in the richest areas people enjoy 19 more years in good health than those in the poorest areas.

A major theme of the Health Profile for England report is future trends in health, which will aid policymakers to prioritise efforts to prevent ill health not just deal with the consequences.

Some of the most notable findings include:

• in the last 7 years, smoking prevalence has dropped by a quarter to 15% and as little as 10% of the population could still be smoking by 2023

1. UK women’s health is faring worse than their European counterparts, ranked 18th lowest out of 28 EU member states for premature death. UK men are doing better by comparison and are ranked 10th.

2. Low back and neck pain and skin disease (dermatitis, acne and psoriasis) are the 2 leading causes of morbidity for men and women, with hearing and sight loss also ranking highly for both sexes

3. While most causes of morbidity become more prevalent with age, mental health problems and substance use affect younger adults the most, accounting for more than a third of the disease burden in those aged 15 to 29 years.

"Inequalities in health undermine not only the health of the people but also our economy.

"As we work to develop the NHS long term plan, we must set the ambition high. If done right, with prevention as its centrepiece, the payoff of a healthier society and more sustainable NHS will be huge."

"Now in its 70th year, demands on the NHS have changed significantly.

"More of us are living longer with painful or disabling conditions, including musculoskeletal problems, skin conditions and sensory loss. While these illnesses often attract less attention than causes of early death such as heart disease and cancer, they have a profound effect on the day to day lives of many people and together they place significant pressure on the NHS.

"The challenge now is for the NHS to respond to this changing landscape and to focus on preventing as well as treating the conditions which are causing the greatest disease burden across our nation."

The new report also shows that good public health is not defined by health policy alone – a high-quality education, a well-designed and warm home, a good job and a community to belong to are just as important.

Health Profile for England has been created with policymakers, both national and local, in mind. PHE wants them to use the report as a shared reference point and to think about the broader impact of their policies on health. The report also links to further PHE tools to allow local policymakers to see how their area compares with the national picture.

The Health Profile for England report’s 7 chapters are:

PHE is leading the prevention, personal responsibility and health inequalities work stream as part of the development of the NHS 10 year plan.