Thousands of offenders will be required to give back to the communities they have harmed in a concerted week-long, nationwide clean-up 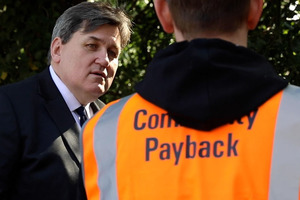 Each year courts hand down more than 50,000 Unpaid Work requirements to punish offenders for crimes including theft, criminal damage and alcohol-related incidents. Wearing high-visibility jackets emblazoned with “Community Payback” ensures offenders are seen to pay for their crimes while carrying out work that benefits the local community.

"To criminals, there are few stronger deterrents than a community that is able to take pride in their area. Safe neighbourhoods attract jobs and investment and let people thrive, free from crime.

"Getting offenders to pay for their crimes in a way that visibly benefits the community they have harmed is critical to making them think twice about tormenting their fellow citizens.

"Offenders are involved in community projects around the country every day, and next week, to support this year’s Great British Spring Clean, we are mobilising more than a thousand to give criminals a chance to clean up their act, payback our communities and show that justice is being done."

Other projects in the week-long clean-up include litter-picks on some of Wales’ most beautiful blue flag beaches in Anglesey and Dyfed Powys alongside tackling fly-tipped eyesores in Newham, London.

Over the next 3 years, the Government is investing an extra £93 million into Community Payback which will see offenders completing eight million hours of unpaid work a year to improve the environment and revitalise our towns and cities.

This is just one small part of this government’s wider work to restore confidence in the justice system. We are tackling crime by introducing new sentencing laws – ensuring the most serious and violent offenders spend longer behind bars, creating 20,000 additional prison places, and recruiting an extra 20,000 police officers to keep the public safe.

We have also invested £183 million to expand electronic monitoring over the next three years to improve public safety – doubling the number of people on electronic tags from around 13,500 to approximately 25,000 by 2025.

From:
Ministry of Justice
The Rt Hon Kit Malthouse MP