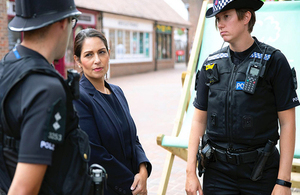 The Home Office is making it simpler for all forces in England and Wales to use Section 60 of the Criminal Justice and Public Order Act, which empowers officers to stop and search anyone in a designated area without needing reasonable grounds for suspicion if serious violence is anticipated.

The nationwide pilot has been extended from a smaller pilot within the seven forces worst affected by knife crime, following an urgent review commissioned by the Prime Minister.

"We are experiencing a knife crime epidemic and I am determined to put a stop to it.

"Police chiefs are clear - stop and search is a vital tool in combatting the scourge of serious violence and keeping people safe.

"Today I am giving them my full support and more police authority to approve stop and search to halt this terrible crime in its tracks."

The rollout will see the Home Secretary lift all conditions in the voluntary Best Use of Stop and Search Scheme over the use of Section 60 by:

• lowering the degree of certainty required by the authorising officer so they must reasonably believe an incident involving serious violence ‘may’, rather than ‘will’, occur

Police forces will still be required to record data around stop and search and monitor its fair and proper use.

In addition, the College of Policing is currently consulting on new guidance for forces on community engagement around stop and search.

"The authority to stop and search people in appropriate circumstances is a necessary power that allows police officers to tackle violence in our communities and prevent people from becoming victims of crime.

"Every day officers across the country seize horrifying weapons and are preventing further injuries and deaths by using their search powers.

"Section 60 powers to stop and search anyone within a designated area can be extremely effective when there have been violent incidents and police commanders believe there is a high risk of further violence occurring.

"The extension of this pilot to all 43 police forces, and British Transport Police across the rail network, will help to reduce bureaucracy and allow officers to use Section 60 controls much faster when it is clear it is in the public interest to do so."

Today the government has also announced plans to shortly publish draft guidance on measures in the Offensive Weapons Act that relate to the sale and delivery of corrosive products and knives, and Knife Crime Prevention Orders (KCPOs).

This will pave the way for new criminal offences that will help to stop knives and dangerous acids making their way onto our streets, including preventing delivery to under 18s of knives bought online and making it illegal to sell and deliver corrosive products to under 18s.

KCPOs are civil orders which can be imposed by courts on any person aged 12 or over to prevent vulnerable individuals from becoming involved in knife crime.

KCPOs will enable courts to impose conditions - such as curfews or requirements to attend educational courses - that will help people resist being drawn into violence and help police officers manage those at risk in the community.

They will act as a deterrent to stop those most at risk from carrying knives, and these will be piloted once a public consultation has been completed on the guidance.

"Our Offensive Weapons Act will give police extra powers to take dangerous weapons out of criminals’ hands, while Knife Crime Prevention Orders will act as a deterrent to those at risk of becoming involved in knife crime."