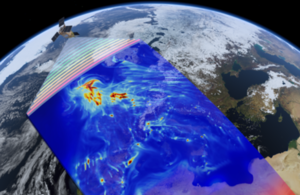 The resolution of the TROPOMI instrument is a huge improvement compared to previous technology. Credit: ESA

Launched into orbit on 13 October, the Sentinel-5 Precursor monitors the atmosphere to help us understand the spread of key pollutants and their impact on our changing planet.

The prime contractor for the development and manufacture of the satellite, which is part of Europe’s world-leading environmental monitoring programme – Copernicus, was Airbus Defence and Space, based in Stevenage, Hertfordshire.

One of the first images shows nitrogen dioxide over Europe. Caused largely by traffic and the combustion of fossil fuel in industrial processes, the high concentrations of this air pollutant can be seen over parts of the Netherlands, the Ruhr area in western Germany, the Po Valley in Italy and parts of Spain.

“After only a few weeks in orbit, this UK-built satellite is delivering real results, shining a light on air quality and demonstrating the important role of the UK’s space sector in tackling global challenges.

“Our Industrial Strategy, published earlier this week, sets out a bold vision for the UK to become the world’s most innovative nation and highlights our commitment to work with industry to capture 10% of the global space market by 2030.”

Another of the first images from Sentinel-5 Precurosor shows ash and smoke from the Mount Agung volcanic eruption on Bali, Indonesia, on 27 November 2017. As well as detecting different air pollutants, the mission also measures aerosols.

Data from the Sentinel satellites benefits the UK in areas such as emergency response and flooding, farming and environmental management, air quality, marine planning and fisheries. The Department for Environment Food and Rural Affairs and the UK Space Agency are championing the use of the satellite data for government policy making, scientific research and commercial services, as the data is also available to companies to create applications that help the wider economy.

Sentinel-5 Precursor is the sixth Copernicus Sentinel satellite. It carries the most advanced multispectral imaging spectrometer to date: Tropomi, developed by Airbus DS Netherlands for the European Space Agency (ESA) and the Netherlands Space Office. This state-of-the-art instrument will map pollutants such as nitrogen dioxide, methane, carbon monoxide and aerosols, all of which affect the air we breathe and our climate.

Since the satellite was launched, the instrument has been going through a planned decontamination process. Now, however, the door that kept Tropomi sealed for this purpose has been opened, allowing light to enter and the first images to be taken.

Even at this early stage in the mission’s life, these first results exceed expectations. These new images offer a taster of what’s in store once it has been fully commissioned for the task of mapping the entire planet every day with unprecedented accuracy, to take air-quality forecasting to a new level.