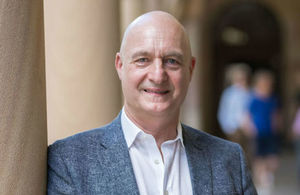 Sam Gyimah, Minister of State for Universities, Science, Research and Innovation, today (Thursday 19 July) announced the appointment of Professor David Gann CBE as new Chair of the UK Atomic Energy Authority (UKAEA). David will take up his post on 1 August 2018, taking over from Professor Roger Cashmore, who will complete his term as Chair at the end of July 2018.

UKAEA is responsible for leading the commercial development of fusion power and related technology. Fusion can play a big part in our carbon-free energy future. UKAEA manages the UK fusion programme at the Culham Centre for Fusion Energy (CCFE), which is a global hub for scientific talent. In recent years UKAEA’s research has created emerging spin-out industries in areas such as robotics, material sciences and reactor design, reinforcing the UK’s position as a world-leader in fusion research and development.

The Chair of UKAEA is responsible for leading the Board’s strategy and ensuring that its objectives are achieved.

"The UK is a world-leader in nuclear technology and innovation and I am delighted that Professor David Gann will be the new Chair of the UKAEA Board.

"His extensive experience in growing businesses and academic institutions will be crucial to the continued success of our nuclear industry. I want to thank Professor Roger Cashmore for his outstanding service to UKAEA. His commitment and dedication to the mission since 2010 has been invaluable in our cutting-edge work towards commercial success in fusion energy."

"I look forward to working with the extraordinarily talented team at UKAEA, and with the wider science and technology community, with the UK positioned as a global leader in fusion technology, providing a future source of sustainable energy.

"Coming from a highly collaborative academic institution, I am excited by the prospect of UKAEA enhancing its global ties with industry and academia. These are exciting times, with the UK’s expertise in atomic energy leading to innovation in a range of technologies in robotics and new materials, which also have a wider set of industrial uses."

On Thursday 19 July UKAEA laid its 2017/2018 Annual Report before Parliament. This sets out UKAEA’s progress against its objectives.

David is Imperial College’s Vice President, leading on innovation, and is a member of Imperial’s President’s Board.

He has played a central role in substantial growth at Imperial College, notably in the new White City campus and new ventures such as ThinkSpace.

David is a chartered civil engineer with a PhD in industrial economics and was Deputy Principal at the Imperial College Business School. He retains roles as Professor of Innovation and Technology Management at Imperial College’s Business School. He is the author of 8 books on innovation, entrepreneurship and technology management, which have been published in 7 languages.