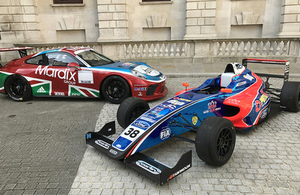 New laws come into force on 10 April 2017 which will allow motor racing events to take place on closed public roads in England.

"Britain is a world leader in the motorsport industry and this will further cement our position. There are already races of this kind in some areas of the British Isles which are incredibly popular, attracting thousands of spectators. New road races will boost local economies through increased tourism and hospitality, and offer community opportunities such as volunteering."

The Motor Sports Association and the Auto-Cycle Union, the respective governing bodies for four- and two-wheel motor sport in the UK, will be authorised to issue permits for the races. They must consult the council, police and other local bodies and be fully satisfied that the event will be safe. Local authorities have the final say over whether a race can go ahead, and may require additional safety measures before, during or after the event as a condition of allowing a race to take place.

"This is a seismic shift for UK motorsport, and one that the MSA and the wider motorsport community have pursued determinedly for many years. We can now take motorsport to the people, and in turn those local hosting communities have the opportunity to benefit from the economic boost that these events may provide."

"A lot of hard work has gone into making this happen. Working with the MSA and the Department for Transport, putting this legislation in place will make a big difference to road racing in this country. Obviously this will make road racing more attractive as new opportunities come along but also will have a positive economic impact on those areas staging closed public road racing which can only be a big plus for motorcycle racing and those areas wanting to host such an event."

"I have seen first-hand the very significant impact of motor sport on the economy of the Isle of Man and Jersey, so this is a great move forward for the sport and will bring visitors and pride to parts of the country that wish to stage such events. I am delighted that this government is embracing motorsport, which will assist the UK’s world-leading position and improve the sport’s ability to help provide opportunities and focus for young people."

The government consulted on changing the law to allow racing on British roads in 2014. There were 6,077 responses from individuals, local authorities, police forces and other organisations, with an overwhelming majority in favour of the proposals.