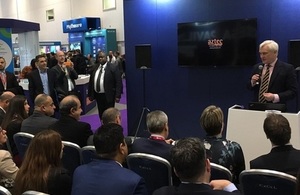 Signed at Bett, the Memorandum of Understanding (MoU) shared with the Professional Computer Association of Lebanon (PCA) will develop innovation in education in Lebanon and facilitate digital transformation development.

Taking place at London’s ExCel, Bett is the world’s biggest education trade show, bringing together over 850 companies and over 34,700 attendees.

The Department for International Trade (DIT) will lead its biggest-ever presence, hosting 20 UK companies on its stand to showcase the best of British innovation in the education sector.

The figures, which include income from international students and English language training overseas, are growing year-on-year to an estimated £19.9bn in 2016 - an increase of 26% since 2010 – generating significant revenue for the UK.

"I’m delighted to see so many UK companies represented at Bett, showcasing our pioneering EdTech and educational supplies sector. The agreement signed today between BESA and PCA is a fantastic example of how UK expertise can benefit educational outcomes in countries across the world.

"Bett will undoubtedly provide many more excellent opportunities for UK companies to take forward existing relationships and find new global partners, and the Department for International Trade is here to help any business looking to deepen its international links."

"We are honoured to be entering into an MoU with our counterparts, the Professional Computer Association of Lebanon. It is clear from our recent trade mission to Beirut, and subsequent follow-up visits, that there are exciting opportunities for the PCA and BESA to combine forces and develop educational initiatives that can both benefit Lebanese pupils, alongside pupils across the region.

"This partnership would not have been possible were it not for the combined efforts of the UK’s Department for International Trade and Department for International Development. It is a paradigm example of how joined-up government can help benefit British commercial interests, as well as helping to drive up the quality of education of pupils, which in this instance includes large numbers of refugees in the region that Lebanon has so generously taken in.

"Sincere thanks must also go to the Lebanese Ministry of Education for being so welcoming to our member companies and being so open to engagement with British educational suppliers."

UK companies exhibiting at Bett include Pobble, a London-based EdTech company that helps improve children’s writing by allowing teachers to plan exciting lessons, allowing pupils to connect with classes around the world, and makes moderation of writing easier.

The company has secured significant international investment from across the globe and is seeing considerable success in markets ranging from the UAE to Singapore.

DIT will also bring delegations of buyers from key markets including China, Indonesia and Brazil, to meet with UK businesses. There will also be an Export Theatre, where market experts from DIT will provide guidance on global markets and international expansion.