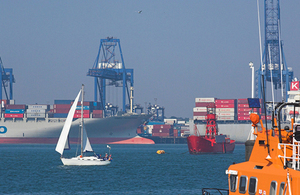 Brian Johnson will become the Maritime & Coastguard Agency’s new Chief Executive when the current CEO, Sir Alan Massey, steps down from running the agency on 31 October 2018.

Brian started his career as a chemical engineer in Imperial Chemical Industries and then Tate and Lyle, designing and managing manufacturing plants. He joined Remploy in 2000 where he was Operations Director, leading substantial improvements in the manufacturing operations. His interest in leading organisations delivering aspects of public service took him into social housing where he was CEO of 3 housing organisations, most recently leading the successful turnaround of Metropolitan. Brian is currently interim Chief Operating Officer at Abzena, a bio-pharmaceutical company.

"I’m pleased to announce that Brian Johnson has been appointed as the next Chief Executive of the Maritime & Coastguard Agency. I look forward to working with Brian and am sure he will build on the excellent progress made by Sir Alan."

“I am confident that Brian has all the skills and qualities we need to build on the excellent work that Sir Alan has done over the past 8 years of his tenure.”