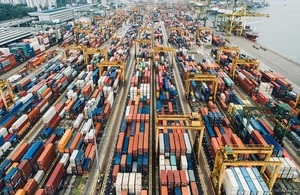 Total exports rise to a record high of £630 billion.

New figures released today (11 January 2019) by the Office for National Statistics (ONS) revealed exports (goods and services) in the year to November 2018 were worth £630 billion, growing by £13.9 billion since the previous year.

There has now been 32 consecutive months of export growth on a 12-month rolling basis.

As the UK considers future Free Trade Agreements with the likes of the USA, Australia, New Zealand and the Comprehensive and Progressive Agreement for Trans-Pacific Partnership (CPTPP), goods exports to these countries continued to boom:

The news comes as London retained its position as the top tech investment destination in Europe earlier this week. According to Pitchbook and London & Partners, the capital received £1.8 billion tech investment in 2018, more than Berlin and Paris combined.

"Today’s statistics once again show UK businesses are exporting with more confidence than ever before, as total exports rise to a record high of £630 billion. As my colleagues and I have witnessed on ministerial visits up and down the country, businesses are simply keen to continue meeting demand for their produce from all corners of the world.

"As we start the new year, I encourage all businesses to mark 2019 as a year for overseas expansion. Whether you are a small business seeking help to sell abroad for the first time, or an established exporter looking to break into new markets, my international economic department stands ready to offer its full support."

Last August, the Department for International Trade launched its ambitious new Export Strategy, seeking to move exports as a percentage of GDP from 30% to 35%.

The strategy set out a range of support which will help businesses make the most of significant export opportunities around the world.