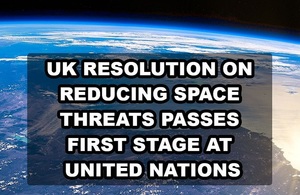 A UK resolution, which calls for a working group of all nations to identify threatening and irresponsible space behaviours, has been passed by the UN General Assembly’s First Committee.

The work is part of Preventing An Arms Race In Outer Space (PAROS). Last year, the UK tabled a new resolution on ‘reducing space threats through norms, rules and principles of responsible behaviours,’ which galvanised a global discussion on what constitutes responsible space behaviour. Those threats are against the satellites, ground infrastructure and the signals and data that make up our space systems.

This year, we continue to lead these conversations, and have tabled a follow-up resolution calling for the establishment of an Open Ended Working Group (OEWG) which can identify threats in outer space, and how responsible behaviours might help tackle them.

"Space systems are central to global security and prosperity. The prevention of an arms race in outer space is a UK priority.

"There is no doubt that there is a growing range of threats to space systems, and a risk that those threats could lead to miscalculation and, in turn, escalation and conflict. Only together can we find solutions to keep space peaceful, sustainable and open to all."

Outer space is important to everybody. All states on earth, whether they are space-faring nations or not, rely on satellites for their security and prosperity. Developments in counterspace weapons in orbit and on Earth mean that it’s far easier to threaten those systems now.

The open international order must extend to outer space, to tackle threats to international peace and security. This resolution contributes to this goal, and recognises the importance of an inclusive conversation about how we tackle these threats to our collective security, and prevent an arms race in outer space.

We will continue this important work as a way to manage and mitigate the perceptions of threat, and avoid conflict. We will also continue to promote a sustainable space environment through our work at the Committee on the Peaceful Uses of Outer Space and in supporting implementation of the 21 Guidelines on the Long Term Sustainability of Outer Space.

The UK resolution will now be put before the UN General Assembly in December.