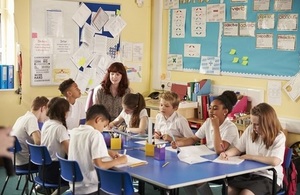 The statistics, based on this year’s Key Stage 2 National Curriculum Assessments – commonly referred to as SATs and designed to measure school performance – show that schools that benefit from the freedoms academy status bring have had particular success in improving outcomes for pupils, with results improving the longer a school has been an academy.

School Standards Minister Nick Gibb has welcomed the results and the improvements that have come from schools that became sponsored academies.

• Academies open for the longest have the highest results:

• At sponsored academies that typically converted because of poor performance, those that have had academy status for one year saw 53% of pupils meet the expected standards in reading, writing and maths, rising to 62% after seven years;

• The gender gap between boys and girls has remained stable, with girls outperforming boys by 8%; and

The new national curriculum and assessments have set a higher standard in schools and today’s rising results show more pupils are meeting that standard, thanks to the hard work of teachers and pupils, and government reforms.

This year’s results are the third to be released following the introduction of a more rigorous national curriculum assessments in Summer 2016, bringing primary education in line with the best in the world. The tests assess how well schools are equipping pupils to go on to secondary school, rather than as a measure of individual pupils’ performance.

Standards are rising in primary schools. In 2017 the attainment gap between disadvantaged primary pupils and their more affluent peers had narrowed by 10.5% since 2011.

"Today’s results show how well schools have adapted to the higher expectations and greater challenge of the new primary curriculum. In the first SATs that tested pupils’ achievements in 2016, just 66% reached the expected standard in reading. Today that figure is 75%.

"Standards are rising in our primary schools and pupils starting secondary school for the first time this week will be better prepared for its new challenges than ever before."

The government has invested in programmes to help raise standards in our primary schools, including a £26 million network of specialist English Hubs around the country to improve pupils’ literacy and £41 million to follow the same approach to teaching maths as world leading countries through the Shanghai Mastery for Maths programme. ‎This is on top of wider changes to the primary assessment system which will reduce unnecessary workload for teachers so they can focus on what really matters in the classroom.

The introduction of phonics – where children learn to read by sounding out and blending letter – has played a significant part the improvement in primary school standards. Since the introduction of phonics in 2012 154,000 more six-year-olds are now on track to be fluent readers and in the latest PIRLS results – an international study of reading at primary school – England achieved its highest ever score.

Today’s figures build on the record 1.9 million children now in good or outstanding schools than in 2010 – an increase from 66% of pupils to 86%. The government is continuing to ensure all parents have a good school place on their doorstep, with the recent announcement of £680million to create 40,000 more good school places in primary and secondary schools. Since 2010, 825,000 new school places have been created, with recent analysis showing 91% of those in 2016-17 were in good or outstanding schools.