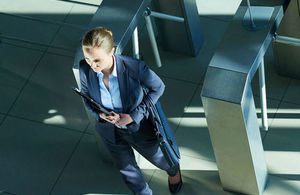 The ‘professional-user access scheme’ has already been trialled at 10 courts and will now be rolled out by HM Courts and Tribunals Service (HMCTS) to an additional five courts in May, continuing nationwide with completion expected in 2020.

Using a secure ID app, those registered can enter courts and tribunals without the need for a full security search each time. The decision to extend the scheme further follows positive feedback from professionals who have already used it, with 86% of those surveyed saying it improved entry to the court.

While tightened security procedures introduced last year will continue, the entry scheme intends to ease queues to get into court and tribunal buildings thereby freeing up security staff time to focus on other court users. Random searches will be carried out to make sure the scheme is working as intended.

"We have worked closely with the legal sector to ensure this scheme is a success without compromising the security of our courts and tribunals.

"Expanding it across the estate will mean professionals can get on more quickly with their work."

"I am delighted that the ID card access scheme that the Bar Council has been working on with HMCTS for so long now is to be rolled out nationally.

"A lot of hard work and investment has gone into developing this scheme, It will be of immense benefit to members of the Bar who will hopefully now gain quicker access to the courts and tribunals in which they work and perform a vital public duty.

"I hope that the roll-out will be completed as quickly as possible. I am grateful for the cooperation of HMCTS in this project."

Registration for the national scheme has begun with the Bar Council and will continue with a phased rollout programme. HMCTS is currently working with other legal associations who also wish to participate to open the scheme for their members in due course.

Simultaneously, a wider effort is being made to make sure there is clear and consistent information about search procedures when entering courts and tribunals. Under the banner of ‘Expect, Inspect, Respect’, HMCTS is informing all court users about the use of mandatory bag searches and archway detectors, which are necessary to keep people in courts safe.

"Security officers identify and confiscate numerous dangerous items every year. They carry out an important, and often difficult, role and should be treated with the respect and courtesy that all court users should expect in return."