Plans for the development of Britain’s new high speed railway between the Midlands and the North moved a step closer today, as HS2 Ltd revealed more detailed design proposals 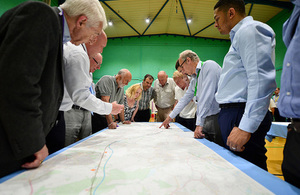 Public consultations will be supported by a programme of community events.

Construction of the Phase One route between Birmingham and London is now well underway with 7,000 jobs already supported through the project. When construction peaks, as the full network progresses, that figure is forecast to rise to 30,000.

HS2 destinations on the Phase 2b route will benefit significantly from the jobs and business growth that HS2 will bring to the region. Around 2,000 companies have already been awarded contracts working on the project, and we expect that number to increase significantly as plans for Phase Two of the railway progress.

This morning 2 new public consultations were launched on the Phase 2b route, which will serve communities between the West Midlands, Manchester and Leeds. The 10 week consultations, which close on 21 December, will give communities the opportunity to formally respond to HS2 Ltd’s designs and proposed mitigation measures for the Phase 2b route. Responses are invited from the public on HS2 Ltd’s:

• working draft Environmental Statement, which describes the design of the railway and reports on the impacts of its construction and operation, alongside the measures proposed to reduce and monitor these impacts; and

• the working draft Equality Impact Assessment Report, which considers the potential effects of the construction and operation of the railway on people with protected characteristics.

The public consultations will be supported by a programme of community events, which will see teams from HS2 Ltd visit locations across the eastern and western legs of the Phase 2b route to talk to people about the design plans and the benefits that Britain’s new high speed railway will bring.

"HS2 is coming to the north and it will reap significant benefits as a result. High speed rail will play a crucial role in rebalancing Britain’s economy; driving business growth, stimulating investment and creating jobs right across the country.

"Through the public consultations, we are providing a more detailed account of how we propose to build the railway and minimise its impacts during construction and operation. We actively encourage people to have their say on the plans we have published today."

Residents and businesses across the Phase 2b route are invited to view the latest designs and respond to the public consultations. A new online resource has been created to help people find information about HS2 in their local area.