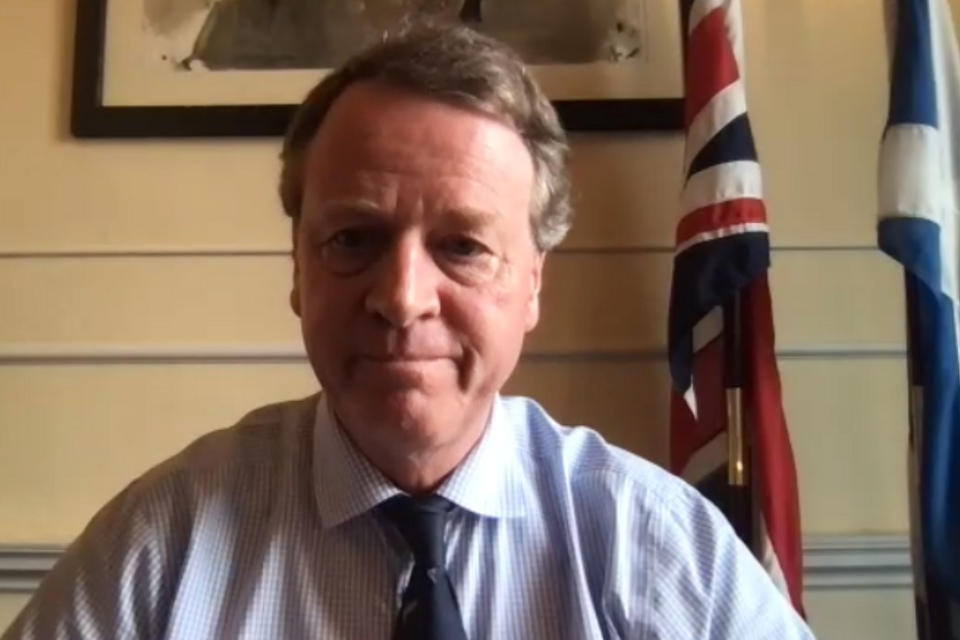 We farmers are nothing if not innovators, early adopters of new technology and ways of thinking which we adapt to deliver tangible results.

The story of farming in Scotland is one of continuous improvement and progress and we stand now in the foothills of what I believe is an exciting new era for agriculture, one filled with genuine opportunity.

We have now left the EU and are out into the wider world. We are making decisions for ourselves and we are in charge of our own destiny.

And this should hold no fears for us.

As a skilled and efficient sector of the economy, farming is well placed to thrive in this new environment and we have every reason to expect a very bright future.

Brexit offers new challenges, yes – but it also offers many new opportunities to do things not just differently but better; to do them in new ways, to do them in a way that is custom-built to suit us in Great Britain.

That does not mean that Europe is closed to us at all – far from it.

Diligent and painstaking, work by the UK Government ensured that we left with a deal.

And let’s make no mistake a deal which is good for Scotland and good for the whole of the United Kingdom.

It is so good that critics – right until the eleventh hour – said that it couldn’t be done.

In fact, we have secured the first free-trade agreement the European Union has ever entered into based on zero tariffs and zero quotas.

And we should not underestimate how useful that is for agriculture and how much heft a global and outward-looking Britain now yields on the world stage.

We in government stand ready to help businesses capitalise on the opportunities created by this deal – helping to boost productivity and to unlock investment.

As part of this, we will continue to engage with businesses and help them to adjust and continue to compete successfully on the global stage.

Of course, the major change for farming is that we are now out of the Common Agricultural Policy.

It is worth taking a moment to talk about that as it marks a huge sea-change.

The UK Government is ensuring that we provide you with the foundations to grasp the opportunities that are laid out before all of us.

We have a huge opportunity in Scotland to now change and grow – and that will require stability.

While agriculture is devolved to the Scottish Government as we all know, the United Kingdom met our commitment to guarantee the current annual budget to farmers in every year of this Parliament.

We have set the overall annual spending envelope at £595 million for Scotland every year for the remainder of the Parliament and that is a solid commitment on which to build.

While the amount of remaining EU funding varies across different areas of the United Kingdom, we have adopted a consistent approach, topping up European Union receipts with Exchequer funding to the level we promised.

This ensures that the promise to guarantee the current annual budget is met right across our United Kingdom. And at the same time, the European Union CAP budget has been cut by around 10 per cent.

So if Scottish farmers were still under the CAP rules, the industry would be around £60 million worse off this year than we were last year – and this would be the case for every year until at least 2024.

Part and parcel of that commitment to you is the 2019 Bew Review into farm funding.

The UK Government has met its commitments to implement Lord Bew’s recommendations in their entirety.

An additional £51 million of funding will be coming to Scotland, and this is over and above the CAP replacement funding.

And to ensure that we continue to implement the Bew recommendations, we will be undertaking a programme of engagement with the Scottish Government ahead of the next Spending Review, to assess what will be required to meet our commitments from 2022/23 onwards.

Now, this time last year, Douglas Ross spoke to you amid concern about the availability of seasonal workers. I am delighted to report that thanks to close co-operation between the NFUS and the Scotland Office, we have together secured access for around 30,000 workers and that is a result we can all welcome

There was much misinformation about Brexit, not least in the field of agriculture, so it is important to set the record straight.

Critics claimed that Brexit was some sort of race to the bottom, that we in Britain would abandon quality in favour of quantity to accept anything offered to us.

And you will have all heard the scare stories about ‘chlorinated chicken’ being foisted upon us.

And it made for good headlines, but the truth is very, very different indeed.

Rather than the EU being the only stewards of high standards, in fact British legislation on livestock husbandry and food production in many cases exceeds those on the Continent.

We now have the chance to continue to drive for quality, setting our own high standards and that means no to the ‘chlorinated chicken’ and some of the things on other people’s imagination.

No products, other than potable water, are approved in the UK to wash poultry.

Existing food safety provisions on the decontamination of poultry were transferred onto the UK statute book and they continued to operate independently in United Kingdom law.

The UK, and especially Scotland, can be rightly proud of our world-leading standards.

The UK Government has been clear that in all of our trade negotiations, we will not compromise on our high environmental, animal welfare and food standards.

Those standards are enshrined in law and remain unsurpassed.

It was a pleasure to work closely with NFU President Minette Batters as we brought forward the Agriculture Bill.

This was the first major piece of domestic legislation on agriculture in over 70 years and Minette was right to hail it as a blueprint for food and farming for generations yet to come.

And I was delighted to be able to facilitate a meeting for her with the Prime Minister and together we agreed that the trade and agriculture commission should be put into statute.

All in all, we are providing a firm basis for maintaining the same high level of protection for both domestic and imported products.

All agri-food products imported into the UK will, as now, have to comply with our import requirements.

The independent advice of our food regulators, and our rigorous processes, will continue to ensure that food imports into the United Kingdom are safe and meet the relevant UK product rules and regulations.

The UK Government remains committed to promoting robust food standards both nationally and internationally, to protect consumer and producer interests, and ensure the public have confidence in the food that they buy.

Let me reassure you that we will stand firm in trade negotiations. Any future trade deals will live up to the values of farmers and consumers alike across the whole United Kingdom.

We will not sign trade deals that compromise our high environmental protections, our animal welfare and food standards, and claims to the contrary are just unhelpful scaremongering.

We are a world leader in these areas and that will not change.

I want to turn now to new horizons where we are already seeing benefits, but first want to touch briefly on the domestic situation.

Its principles of mutual recognition and non-discrimination ensure a level playing field UK-wide, and offers certainty for businesses.

Looking further afield, we have already struck trade deals with more than 63 countries around the world, worth £217 billion a year.

This includes deals with Canada, Japan and Singapore – and with many more in the pipeline.

Let’s take our Free Trade Agreement with Japan, where we can be judged by our deeds.

Here is an example of a UK Government deal which has boosted the agricultural sector in Scotland and I am pleased the NFUS agree with us on that evaluation.

It offers more generous access for malt and recognition of more geographical indications – potentially up to 70. It underpins access for UK goods, almost 99 per cent tariff-free, exported to Japan.

We are forging ahead, ensuring sensitive sectors will be protected, and Japan is just one example of the new opportunities we can maximise for the first time in 50 years.

We also need to make up for lost time and the UK Government is surging ahead.

Our new tariff regime will make our economy more competitive, and will cut red tape for traders.

The new Free Trade Agreements we strike, like those we are already negotiating with the US, Australia and New Zealand, will grow our GDP, increase our trade with the rest of the world, create fresh opportunities for our exporters and deliver better choice and value for our consumers.

We are now seeking accession to the Comprehensive and Progressive Agreement for Trans-Pacific Partnership, and that will open up further opportunities for our exporters.

British produce is renowned for its quality and is highly competitive in the global marketplace.

We want trade deals that present new opportunities for farmers to sell their brilliant products.

This includes some of the world’s biggest consumer markets in the Americas and the Pacific – while protecting British agriculture and its very high standards.

All in all, we are rebalancing our trading relationships towards the fastest-growing parts of the world, ensuring that the UK is well placed for the global economy of the future.

Taken together these deals will give Scotland’s rural communities an opportunity on the global market not available to us in the last 50 years.

Scotch beef, Orkney Cheddar, from barley to venison – we will be at the forefront of the UK’s Global Britain programme.

On red tape, you will be aware that some in the seafood sector have faced significant issues in exporting their goods to the EU and some meat exporters have also had problems.

We have been working round the clock to solve the issues, many of which lie on the other side of the Short Straits. I am pleased to report that, working as partners, we are getting through these temporary difficulties and everything is being done to ensure our vital export trade experiences minimal disruption.

Seed potatoes are, I know, a concern for many of you and we are making Herculean efforts here, reaching out to the EU to seek a change to its unjustified stance on another quality Scottish product.

I began by mentioning innovation where we are world leaders.

In my own constituency we have a major egg producer who uses the chicken droppings to both heat the barns and provide power for the farm.

The resulting ash is useful for fertiliser.

It’s just one of dozens of examples of farmers harnessing technology to deliver high-quality products while stewarding the environment for future generations.

We have a golden opportunity to plan for the future and to set the direction we want – industry and government in partnership.

My office values our excellent relationship with the NFUS highly.

And I can assure you that your voice is heard at the very highest levels of the United Kingdom Government.

This helps to make sure that UK Government policy in agriculture continues to benefit Scotland.

And we look forward to working with you to make life outside the EU the great success that we all know it can be.

So, I would conclude by saying I am confident that agriculture, in common with other sectors of our economy, has nothing to fear and has everything to gain in the years ahead.

From:
Office of the Secretary of State for Scotland
The Rt Hon Alister Jack MP