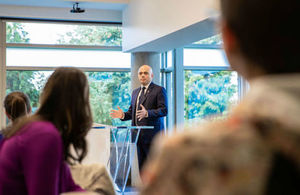 Engineers from some of the world’s biggest tech firms, including Microsoft, Facebook, Google, Snap and Twitter, worked for 2 days at a hackathon in the United States co-hosted by the Home Secretary and Microsoft, which tasked industry experts to come up with tools to identify online child grooming.

A prototype tool has been developed that can be used to automatically flag potential conversations taking place between child groomers and children.

"We all have a responsibility to tackle online child sexual exploitation and the new tool developed during the hackathon is a positive step forward.

"Once complete, it will be rolled out for free to other tech companies that want to deploy it.

"This is just one thing we can do together to combat this appalling crime."

Hackathon participants analysed tens of thousands of conversations to understand patterns used by predators. This enabled engineers to develop technology to automatically and accurately detect these patterns.

Potential conversations between a groomer and their victim will be flagged so a moderator can investigate further.

Further work will take place on the prototype. Once completed it will be licensed free of charge to smaller and medium-sized technology companies worldwide.

During his trip to the United States the Home Secretary met major tech firms so he can be updated on their efforts to tackle the crime. He used the meetings to explore how companies could make greater use of technology to proactively find and remove abusive content from their sites.

He noted that, while some progress had been made, companies still had to go further and work faster to tackle online child sexual exploitation (CSE). The Home Secretary was thanked for his leadership and commitment to the issue of CSE.

Online child sexual abuse will be the focus of the next Five Country Ministerial meeting in London in summer 2019, bringing together interior ministers and attorneys general from the UK, US, Australia, Canada and New Zealand.

Last week the government announced a package of measures to tackle online CSE. This included:

• a taskforce, chaired by the Home Secretary, bringing together representatives from ad agencies, trade bodies and brands to ensure criminals don’t have access to this funding stream

• a £250,000 innovation call for organisations to bid for funding to assist them in developing innovative solutions to disrupt live streaming of abuse