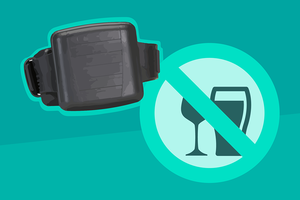 The ankle tags, which are to be rolled out across England and Wales, perform around-the-clock monitoring of an offender’s sweat to determine whether alcohol has been consumed. If they drink – breaching their alcohol abstinence order – they can be returned to court for further sanctions. These might range from a fine, extending the length of the order or in some cases imprisonment.

It follows 2 successful pilots, one across Humberside, Lincolnshire and North Yorkshire, and another in London, which showed offenders were alcohol free on 97% of the days monitored.  Wearers also reported a positive impact on their lives, wellbeing and behaviour.

Courts will be able to order offenders to wear a tag for up to 120 days. The tough community sentence not only punishes offenders but aids their rehabilitation by forcing them to address the causes of their behaviour –  in turn helping to reduce alcohol-related harm.

A national rollout will commence later this year.

"Alcohol-fuelled crime blights communities and puts an unnecessary strain on our frontline services.

"Smart technologies like sobriety tags not only punish offenders but can help turn their lives around.

"While prison will always be the right place for many criminals, tough community sentences like this can help cut reoffending and protect the public."

"I welcome the use of the alcohol tags being rolled out across England and Wales. During the trial in our area they provided rehabilitation agencies a real opportunity to work with the individual and get them to recognise and change their behaviour.

"Undoubtedly their use will help reduce the number of victims of alcohol-related crime, many in domestic situations, and aid the rehabilitation of offenders as they become a standard feature of the Criminal Justice System.

"This shows Humberside is at the forefront of influencing innovative Criminal Justice policy, shining a light on our area for the right reasons."

An estimated 39% of violent crime involves an offender under the influence of alcohol – with the social and economic cost of alcohol-related harm being £21.5 billion per year.

The technology works by fitting a tag around the ankle of an offender. This then samples their sweat every half-hour to determine whether alcohol has been consumed. They can distinguish between alcohol-based products, such as hand sanitiser, that could be used to mask alcohol consumption and can detect when contact between the skin and the tag has been blocked.

An offender who wore one of the tags in the Humberside, Lincolnshire and North Yorkshire pilot scheme and was managed by HLNY CRC said:

"Since I had the tag removed I feel 100% in control of my drinking. I was worried to begin with that when I had the tag taken off I might go back to drinking again but the process gave me a better understanding of alcohol.  I also didn’t want to go back to court.

"I no longer need a drink to manage my emotions which is down to the tag and my probation officer – I’m much happier with my life now and pleased that more people can benefit from my experience of wearing the tags."

The tags are a further example of using technology to better monitor offenders in the community and follow last year’s rollout of GPS tags that monitor an offender’s location 24/7.

It builds on government action to overhaul the criminal justice system – recruiting 20,000 new police officers, investing £2.75 billion in prisons and ensuring the most serious violent and sexual offenders spend longer in jail.