The UK will continue to have a military presence in Germany beyond 2020, Defence Secretary Gavin Williamson has announced today 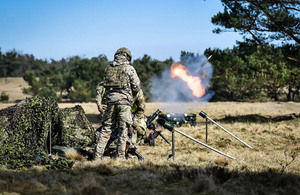 Around 185 British Army personnel and 60 Ministry of Defence civilians will remain in Germany, once the withdrawal of British Army units to the UK has been completed.

"We are increasing our British points of presence across the world. We will not be closing our facilities in Germany, and instead use them to forward base the Army."

Army personnel will be permanently based in the country where the UK is retaining the 45-square mile Sennelager Training Area, which provides both UK and NATO forces with an expansive live firing training area. It has a long tradition as a home from home for British service personnel.

The remaining Army personnel will also support critical NATO infrastructure and assets such as the combined river crossing capability based in Minden. It uses M3 vehicles jointly operated by British and German troops, and both nations are currently in discussions regarding a future bilateral upgrade of the vehicles.

Retaining Sennelager alongside the adjacent Athlone Barracks will provide remaining British personnel with the vital domestic infrastructure, including housing and schooling.

Elsewhere the Army is maintaining a presence at the Ayrshire Barracks in Mönchengladbach, where approximately 2,000 vehicles can be stored, and the German Wulfen Defence Munitions Storage Facility, which holds operational ammunition.