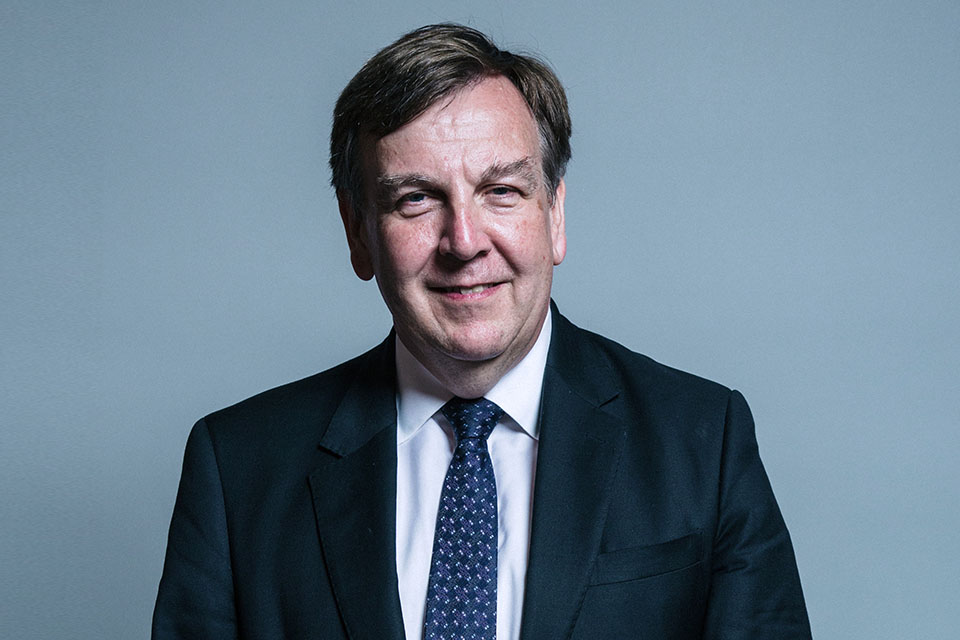 Thank you very much. It’s a pleasure to be speaking to the RTS at Cambridge once again. The last time I addressed you I was introduced by a VT by Status Quo, which is still one of my treasured possessions.

I hadn’t quite expected to be back either in this capacity or quite in these circumstances, but it is a pleasure.

I should make clear, as you will have gathered, but the speech I’m about to deliver is the speech that was written, and certainly it was the intention of Oliver Dowden to give, but it is very much the speech of the Secretary of State, and I’m looking forward to working with Nadine who as you have heard has just been appointed this afternoon.

Despite everything we’ve been through with COVID, the British screen industry is in fact booming.

The people behind the biggest and most exciting productions - Bond, the new Lord of the Rings - have their pick of any country in the world to make their films and TV shows. And they are choosing to make them here.

Studios up and down the country are running at full capacity.

New ones are opening up all the time - from Broxbourne to Birmingham; and from Edinburgh to Elstree.

The nation united as a global production power house.

And this hasn’t happened by accident.

…from quarantine exemptions to tax breaks…

…to our Global Screen Fund…

…and to our UK-wide, £500 million, Film and TV Restart Scheme, which has kept cameras rolling on productions across the country throughout the pandemic.

That scheme has kept up momentum during COVID, and helped secure hundreds of thousands of high-quality jobs in film, TV and the wider broadcasting system.

The screen industry is generating meaningful, creatively fulfilling jobs - jobs that I’d want to do, and that I’d want my children and grandchildren to do.

And the productions these people work on have an impact all over the world.

His Dark Materials. Dracula. Unforgotten. Last year’s biggest TV exports have been viewed in hundreds of territories, from China to Brazil to Australia to South Korea.

Or to take another example. Sex Education: Filmed in Newport, and the most popular show in Saudi Arabia.

Of course, we celebrate this.

But it doesn’t address the central theme of this conference, which is “Britishness”.

Britishness is, of course, a nebulous concept. It means different things to each and every one of us in this room. And yet we all know it when we see it on our screens.

The sort of things we’ve all grown up with.

Only Fools and Horses, Dad’s Army, Carry On.

More recently, The Great British Bake Off and Line of Duty.

And of course Coronation Street and Eastenders.

In fact, who we are has been defined by television.

At the same time, film, television and radio are by far the most powerful tools we have to project the best of modern Britain to the rest of the world.

Not just to show off our creativity - and there’s no doubt that this country is home to some of the most gifted creative talent in the world - but to broadcast our values and our unique identity across the planet.

So, as the government looks at the future of broadcasting in this country, we intend to use our upcoming White Paper to preserve what is special about British broadcasting.

First, we want to make sure that British-made content is, in fact, distinctively “British”.

I’m not talking about waving union flags and a picture of the Queen in every scene.

I’m talking about continuing to make the programmes that are ours, and only ours; that could only have been made in the United Kingdom.

Take Derry Girls. A show that addresses the Troubles; and the rise and fall of Take That with equal passion. It could only have been made here.

Likewise, what other country in the world would have come up with a concept as bonkers but brilliant as Gogglebox?

Fleabag isn’t Fleabag without its British sarcasm and self-deprecation.

And the last episode of Blackadder Goes Forth, when the squadron goes over the top, would never have been as poignant without that classically British dash of restraint.

Contrast that with some of the programmes you can get on demand today.

They can be brilliantly entertaining - but many of them have no real identity, no genuine sense of place. Some of them look like they’ve been cleverly generated by a streaming algorithm to maximise their target audience globally.

Keeping the British spirit and identity alive is a challenge in today’s global broadcasting world, when investment is increasingly driven by global streaming services.

Our public service broadcasters now get more money for drama from foreign investors than they spend themselves.

That investment is extremely welcome - in fact, it’s absolutely crucial to their survival.

But we want to make sure it doesn’t water down British creativity or the British brand.

Our public service broadcasters have a unique role to play in that context.

And the government wants to empower them to keep making things that are just as unique and distinctively “ours”, no matter where the money is coming from…

…To continue producing shows that aren’t just authentic and relevant to British audiences. Ones that allow people in every corner of the UK to see themselves - and their own way of life - reflected on their screens.

But also to showcase the things we are most proud of to the rest of the world.

To make things that are iconic, not generic.

So in our upcoming White Paper, we intend to include proposals that will expand the remit of public service broadcasters, so that it includes a requirement for them to produce “distinctively British” content.

If it’s set in Britain and made in Britain by our public service broadcasters, then it should be distinctively British.

At the same time, we want to ensure British broadcasters get the exposure they deserve - no matter how their content is consumed.

Public service broadcasters have been part of our national life for almost a century, and are uniquely placed to reflect our values.

In a world of fake news and disinformation, they’re a trusted source of content and information.

And they play a crucial role in bringing the nation together in times of crisis and celebration - whether it’s a national COVID press conference or a royal wedding.

So it’s incredibly important that they keep their place at the heart of television.

That’s why we plan to legislate as soon as possible, and make it a legal requirement that major online platforms must carry PSB content, and that they must ensure that it’s easy to find.

To support the future sustainability of public service broadcasting, Ofcom will also be given new powers to support effective commercial negotiations with platforms.

That is one way of making sure our British broadcasters thrive.

Another is putting them in the right financial position to compete and succeed for decades to come - no matter what the future of broadcasting holds.

As you’ll all no doubt be aware, indeed I’ve just been listening to Alex before me, this summer we launched a consultation to consider the ownership of Channel 4.

That consultation closed yesterday, and the government’s position is that a change of ownership could be beneficial for Channel 4; and beneficial for the country.

Let me be clear: Channel 4 is one of this country’s great assets.

It was created by a Conservative Prime Minister, Margaret Thatcher, to open up the market; to boost the independent production sector; and give viewers more choice when they turned on their sets.

It has succeeded in that mission in the four decades since, and it has managed to withstand an incredible amount of turbulence in the last few years - from streaming to COVID.

Right now, Channel 4 is in a stable position.

But too many people are fixated on Channel 4’s current situation.

The government is much more concerned with its long-term future.

And we believe that if Channel 4 wants to grow. And, as Alex has set out, it both wants and needs to grow. Then at some point soon it will need cash.

Without it, Channel 4 won’t have the money to invest in technology and programming, and it won’t be able to compete with the streaming giants.

So the next obvious question is where does that cash come from?

It can either be on the back of the taxpayer, or it can come from private investment.

And it’s our strong position - as a point of principle - that the borrowing of a commercial TV channel should not be underwritten by a granny in Stockport or in Southend.

Instead, we can help it unlock that much-needed investment.

And we can do so while protecting the parts of Channel 4 that none of us want to lose.

So if we do choose to proceed with a sale, we will make sure that Channel 4 remains subject to proper public service obligations.

And I’d imagine that those are bound to include:

…a continued commitment to independent news and current affairs…

…to commissioning programming from the independent production sector…

…and that Channel 4 should continue to be representative of the entire nation.

Let me be clear: the government does not subscribe to the false binary choice between public service content and privatisation. We can have both.

Channel 4 can continue to do what it does best: to fund original, risk-taking content - the kind you don’t find anywhere else. And to showcase the very best of this country on free-to-view television.

It did a fantastic job at broadcasting the Paralympics. And we want it to keep doing that fantastic job in another three years’ time, and the years after that.

And I was delighted that Channel 4 was able to bring the entire country together on Saturday night to cheer on Emma Raducanu in the US Open Final.

We’ve needed these national moments this last year, and we need more of them on free-to-view.

A Channel 4 with a protected remit and deeper pockets could bring us many, many more in the future.

And we’re acutely conscious of avoiding a repeat of Project Kangaroo, when Channel 4, ITV and BBC Worldwide were blocked by the Competition Commission from launching an online platform that could have led the market and set them all up for years of growth.

By presuming that we didn’t have to change, and by sticking with what we knew, rather than thinking creatively, we stymied the opportunity to create a home-grown alternative to Netflix.

A decade later, this government is determined we don’t miss the opportunity to equip British broadcasting for the next decade.

And if people disagree, then the challenge to them is: please tell us how they’d intend to protect Channel 4 and the wider creative industries in a fairer, more sustainable way.

Because standing still is not an option.

In fact, it would be an act of self-harm.

I want to make one final point, and it’s an important one.

Whatever happens, whatever decision we take with Channel 4, there is no way this government will ever compromise our independent production industry.

As I said at the beginning, UK film and TV is booming.

Our economy relies on our creative industries.

No less than our national identity relies upon it.

We will do everything we can to protect it in the years ahead.

That’s the job of government: to think not just about today, but about tomorrow, too.