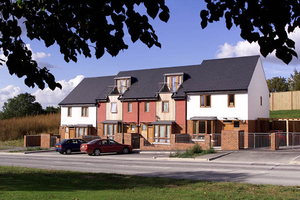 All new-build houses will be sold as freehold in a bold move to tackle unfair leasehold practices and prevent future home-owners from being trapped in exploitative arrangements, the Communities Secretary said today (27 June 2019).

In a wide-ranging speech to the Chartered Institute of Housing conference in Manchester, the Rt Hon James Brokenshire MP confirmed plans to abolish the selling of new houses as leasehold properties and reduce ground rents for new leases to zero – putting cash back into the pockets of future homeowners.

To stop freeholders and managing agents taking as long as they want – and charging what they want - to provide leaseholders with the vital information they need to sell their home, ministers will introduce a new time limit of 15 working days and a maximum fee of £200 to make the home buying process quicker, easier and cheaper.

The Secretary of State has also instructed Homes England to renegotiate Help to Buy contracts to explicitly rule out the selling of new leasehold houses, other than in exceptional circumstances, to protect new home buyers from unscrupulous charges.

And where buyers are incorrectly sold a leasehold home – saddling them with a property that could ultimately prove difficult to sell – consumers will be able to get their freehold outright at no extra cost.

The measures announced today demonstrate the government’s commitment to ensure decent and fair housing for the people and communities that need them, as it strives to deliver 300,000 new homes a year by the mid-2020s.

Other important proposals unveiled include new proposals to make it easier for renters to transfer deposits directly between landlords when moving; extra funding for 19 new garden villages; and radical new measures to speed up planning applications.

"We have long recognised that we have a responsibility to confront unfairness in the leasehold market. Last year we consulted on proposals including the leasehold house ban and ground rent reduction.

"Today I can confirm we will go ahead with our original plan to reduce ground rents on future leases to zero, as opposed to a cap of £10 per year.

"And we will legislate to ensure that in the future – save for the most exceptional circumstances – all new house will be sold on a freehold basis.

"We are committed to taking bold action to reform the sector and will be pressing ahead as soon as parliamentary time allows – helping us delivery our promise to make the home buying and selling process quicker, cheaper and easier."

The government’s proposals have already had a fundamental impact on the housing market since they were unveiled, with the sale of leasehold houses falling from 11% to just 2% this year.

More than 4 million people live in the private rented sector, yet when moving home, some tenants can find it a struggle to provide a second deposit to their new landlord – risking falling into debt or becoming trapped in their current home. Ministers want to understand the scale of this problem.

Ministers are inviting proposals to make it easier for renters to transfer deposits directly between landlords when moving from one property to the next.

Freeing up deposits and allowing a renter’s hard-earned cash to follow them from property to property – as they move to take that perfect job, to move nearer to family, or find a place that suits their changing needs – will create a fairer housing market that works for all.

New garden communities to be created

An extra 19 garden villages will be created across the country, with the potential to deliver 73,554 homes, it has been announced today.

The government is providing £2.85 million to support the development of plans for housing from County Durham in the North to Truro in the South West.

Each of the projects will be given £150,000 to progress planning applications and specialist reports needed before homes are built.

The new settlements include a dementia-friendly community village at St George’s Barracks, in Rutland, which would allow the elderly to live safely and independently in their own homes.

Councils will be able to approve planning applications more quickly under radical new measures to remove bureaucracy from the system.

The new accelerated planning green paper, to be published later this year, will dramatically improve the planning process.

This is part of a renewed and refreshed focus on making sure planning authorities have the resources they need to act for the benefit of homeowners – delivering a better service, faster than ever before.

New measures will also be taken to prevent developers selling leasehold houses through the Help to Buy Scheme - preventing taxpayers’ money from directly supporting the unjustified sale of leasehold houses.

The Communities Secretary has today instructed Homes England to renegotiate contracts with all Help to Buy developers to explicitly rule out the building and selling of leasehold houses, other than in exceptional circumstances.

This all comes as a further 18 leading property developers, managing agents and freeholders – including Crest Nicolson and Keepmoat Homes – have signed up to the government’s industry pledge, committing them to freeing existing leaseholders trapped in onerous deals where ground rents double every 10 or 15 years. This takes the total number of signatories to over 60.

The government wants to see more good quality homes that people are proud to buy and proud to live in – and a New Homes Ombudsman, will protect the rights of homebuyers and hold developers to account.

Today ministers have launched a consultation on redress for purchasers of new build homes and the New Homes Ombudsman. This seeks views on the detail of the proposed legislation and how a new homes ombudsman can be delivered and will run until August 22.

They are also exploring the options to appoint a New Homes Ombudsman in shadow form – someone to work closely with industry, consumer groups and government to ensure improvements and standards are delivered quickly and help shape the future scheme.

This marks the first time any government has invested such long-term funding in new affordable homes through Housing Associations, supporting the development of more ambitious long-term plans to build the homes this country needs.

These new bids will continue to build on the over 430,000 affordable homes delivered since 2010.