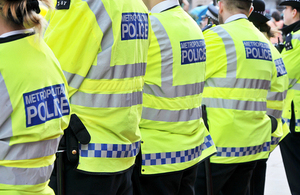 Police will be able to stop and search people they suspect of carrying a corrosive substance in public places, under Home Office proposals published in a consultation today.

This suggested strengthening of police powers will enable officers to better prevent acid attacks and is part of the government’s efforts to tackle violent crime and protect the public.

The Home Office has also commissioned scientists at the government’s Defence Science and Technology Laboratory (Dstl) to develop a portable kit so that police can test suspected corrosive substances on the street. The kit, which is backed by police leaders, will enable officers to determine on the spot whether an individual is carrying a corrosive substance and take immediate action to help stop life-threatening acid attacks.

It follows the introduction earlier this year of the Offensive Weapons Bill, which will create a new offence of possessing a corrosive substance in a public place.

Existing powers allow police officers to stop and search an individual where they suspect the person is in possession of a corrosive substance and is intent on causing injury.

But the proposed extension of powers will enable police to search anyone they suspect is carrying a corrosive substance in a public place, enabling them to take better preventative action.

"Acid attacks are appalling acts of violence that devastate lives and can have fatal consequences.

"A bottle of acid can be as lethal as a knife or a firearm, and these new powers will enable police officers to prevent these despicable thugs from carrying out their terrible crimes.

"The Home Secretary has been clear that stop and search is a vital and effective policing tool when used correctly. We will always seek to give police the powers they need to crack down on violent crime and bring perpetrators to justice."

"The use of acid to commit acts of violence is particularly abhorrent – perpetrators aim to leave their victims with horrific and life-changing injuries.

"Tackling the scourge of acid attacks requires a coordinated approach across a number of different organisations and sectors. I support proposals to extend stop and search powers, so that they cover individuals suspected of carrying a corrosive substance in public without good reason.

"Stop and search is ultimately a safeguarding power – we use it to prevent crime, identify those who intend to cause harm and disrupt serious and organised crime networks. Officers should be confident to use stop and search – proportionately and respectfully – because it’s an important investigative tool."

The Home Office is also consulting on proposals to give police greater powers to stop and search people over the misuse of drones and laser pointers, both of which are on the increase.

The number of incidents of drones coming close to manned aircraft, which has potentially catastrophic consequences, rose to 93 in 2017.

The use of drones to smuggle contraband into prisons is also increasing.

Similarly, the misuse of laser pointers against vehicles is a growing concern. Since 2010, there have been more that 1,000 incidents of lasers being pointed at aircraft reported to the Civil Aviation Authority.

Shining a laser at a vehicle and dazzling or distracting the person in control became a specific offence under the Laser Misuse (Vehicles) Act 2018.

Extending stop and search powers to cover offences under the Laser Misuse (Vehicle) Act 2018 and Air Navigation Order 2016 and Prisons Act 1952 are intended to enable more effective enforcement, targeting those individuals who are intent on causing harm.

"Illegally-used drones and lasers are a very real safety risk to aircraft, particularly during critical phases of flight, such as take-off and landing.

"Laws are now in place to protect aircraft from both drones and laser pointers, and we support efforts by the police to enforce these laws."