Jail is the first milestone in the Prime Minister’s pledge for 10,000 new prison places 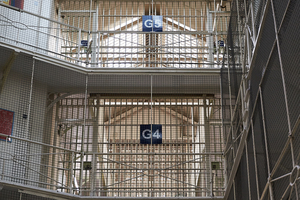 Plans for a new modern jail at Full Sutton have been approved today (12 September 2019) – paving the way for the first of the 10,000 additional prison places.

The prison is the first major step in the government’s £2.5 billion programme to transform the estate, providing modern and efficient jails that will boost rehabilitation and cut reoffending.

The new 1,440-place category C resettlement prison will open in 2024 and stand alongside the existing, well-performing maximum-security jail at Full Sutton in East Yorkshire.

"The new jail at Full Sutton is the first milestone in our long-term plan to deliver 10,000 additional modern and efficient prison places.

"It will create and support hundreds of jobs, during construction and afterwards, and will be a major boost to the local economy.

"The prison will also provide a better environment to steer offenders away from crime – ultimately keeping the public safer and reducing the number of future victims."

The expansion is part of a long-term £2.5 billion programme to transform our jails, with 10,000 additional places set to reduce crowding and create an estate that is fit for the future.

The 10,000 places will be in addition to the new prisons that have already been announced, at Wellingborough and Glen Parva, which will provide 3,360 places by 2023.

The £2.5 billion investment – announced by the government last month - will also be used to bring previously decommissioned prison places back into use through extensive refurbishment and maintenance work.

This comes alongside an investment of £100 million to bolster security and stability in prisons, in addition to £70 million announced previously.

This will fund tough airport-style security, including X-ray scanners and metal detectors, across the prison estate to clamp down on the drugs, weapons and mobile phones that increase the risk to our officers and hinder rehabilitation.