Officers visited more than 50 suspected illegal waste sites across the East of England in a single day, finding half were breaking the law 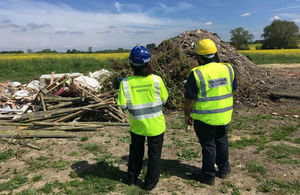 EA and HMRC officers carrying out the sting found 27 waste sites operating illegally, including this one near Grantham

The largest one-day sting ever carried out by the Environment Agency and HM Revenue and Customs (HMRC) has confirmed illegal activity at more than 2 dozen waste sites across Lincolnshire, Northamptonshire, Cambridgeshire and Leicestershire.

Officers found 4 sites where waste had been burnt illegally, a further 4 which were actively and illegally treating and transferring waste, and a number containing construction and demolition waste, vehicle parts and household waste.

Among the rubbish, officers observed shredded plastics, soil, rubble, scrap metal, tyres, pallets – and, at one site, a number of discarded toilets.

Some of the sites contained overflowing skips and more than 5,000 tonnes of waste being stored illegally.

A total of 54 sites were visited by officers; of them, half were found to be operating within the law. Those that weren’t will receive written guidance from the Environment Agency clarifying the steps they must take, and follow-up visits will be arranged to make sure the site operators comply.

"We will be following up on every single site where we’ve found illegal activity so we can put a stop to activities that blight our neighbourhoods, our environment and our economy.

"Working closely with HMRC to investigate these reports from local communities has helped us strengthen our working relationship, identify sites of interest, and prevent and disrupt crime that puts people, wildlife and legitimate businesses at risk.

"We take waste crime extremely seriously, and formal investigations into these sites are now underway. We rely on intelligence from local communities to put a stop to waste crime, so if you have information about suspicious activity, report it to us by calling 0800 80 70 60."

Evidence gathered from the visits will be used against those breaking the law. Further enforcement action could include work with local authorities, the police, and HMRC to prevent and disrupt crime, the serving of notices to have waste removed from land, and prosecution of offenders.

If convicted of illegal waste activity, offenders face unlimited fines and up to 5 years in prison.

Earlier this year EA officers in Lincolnshire and Northamptonshire visited nearly 30 sites in a single day – uncovering illegal activity at 11. Across both counties, more than two dozen cases are currently under formal investigation.

More information on the requirements for disposing of business or commercial waste can be found on gov.uk.

Illegal waste activity is estimated to have cost more than £600m in 2015 in England alone.

However, over recent years, the Environment Agency has made great strides in tackling waste crime; more than 5,400 were stopped between 2011 and 2017 and an average of two sites are shut down every day.