Tougher sentencing and monitoring in government overhaul of terrorism response

Tougher sentences, an end to early release and a review of the management of convicted terrorists announced to strengthen the UK’s response to terrorism 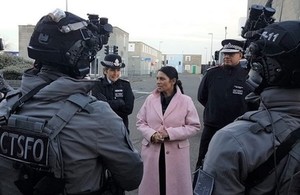 Tougher sentences, an end to early release and a major review of the management of convicted terrorists are among a raft of measures to strengthen the UK’s response to terrorism, the government has announced today (Tuesday 21 January).

Confirmed by Home Secretary Priti Patel and Justice Secretary Robert Buckland QC, the new Counter-Terrorism Bill, to be introduced in the first 100 days of this government, will force dangerous terrorist offenders who receive extended determinate sentences to serve the whole time behind bars and ensure those convicted of serious offences such as preparing acts of terrorism or directing a terrorist organisation spend a mandatory minimum of 14 years in prison.

It will also overhaul the terrorist licensing regime, doubling the number of specialist counter-terrorism probation officers and introducing measures such as polygraph testing. It will increase the number of places available in probation hostels so that authorities can keep closer tabs on terrorists in the weeks after they are released from prison.

The government will also review support available to victims of terrorism, including families and loved ones. We will immediately invest £500,000 to increase the support provided by the Victims of Terrorism Unit, to ensure more victims get the support and advice they need, faster.

"The senseless terror attack at Fishmongers’ Hall in November confronted us with some hard truths about how we deal with terrorist offenders, which is why we immediately announced a review into sentencing and licence conditions, to do whatever is necessary to stop these sickening attacks from taking place.

"Today we are delivering on those promises, giving police and probation officers the resources they need to investigate and track offenders, introducing tougher sentences, and launching major reviews into how offenders are managed after they are released.

"We will also review the support available for victims and their families to make sure they receive the help they need."

The government will also launch a sweeping independent review of the way different agencies, including police, the probation service, and the security services investigate, monitor and manage terrorist offenders – called Multi Agency Public Protection Arrangements (MAPPA). This will be led by Jonathan Hall QC, the Independent Reviewer of Terrorism Legislation.

"Terrorists pose a great risk to our society and our way of life, which is why we must bring them to justice and keep the public safe.

"Coupled with our strong measures to manage terrorists behind bars, this Counter-Terrorism Bill toughens restrictions on offenders’ communications, increases the number of specialist staff managing them and will ensure they are monitored effectively."

Delivering on the government’s commitments following the Fishmongers’ Hall attack, the announcement represents a major shift in the UK’s approach to the sentencing and management of terrorist offenders by closing gaps in the investigation and monitoring of convicted terrorists.

Alongside the bill, the government is making a major investment in counter-terrorism resources in prisons and probation. The package of measures being announced include:

• doubling the number of counter-terrorism specialist probation staff - these specially trained staff will deliver a set of new, intensive national standards for managing terrorists on licence - these new standards will mean terrorists are subjected to closer monitoring and reporting requirements

• an increase in the number of specialist psychologists and specially trained imams, who play a vital role in assessing risk and challenging the beliefs of radicalised offenders

• an increase in the resources dedicated to training front-line prison and probation staff, who are the first line of defence in identifying and challenging extremism in prisons and probation