An ambitious programme for government reform, to ensure the country builds back better from COVID-19 has been launched by ministers and civil servants today 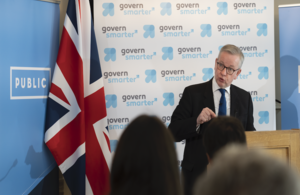 The programme will ensure that the government has the tools and resources it needs to deliver on its agenda to level up across the UK.

It will rebalance government away from Whitehall, open up the Civil Service to fresh skills, talent and ideas, and embrace digital technology and data based decision-making.

A first ever joint meeting of the Cabinet and departmental Permanent Secretaries agreed today the Declaration on Government Reform.

The Chancellor of the Duchy of Lancaster also delivered a speech entitled ‘The Obligations We Owe: Reforming government in the shadow of COVID-19’:

"It’s been a consistent feature of our history that the national weaknesses, fissures or fractures that have been laid bare or exacerbated by crises should be addressed with the same energy and single-mindedness required for a successful response to the crisis itself.

"It is precisely because the Covid crisis revealed weaknesses in our government and society, because it also showcased strengths, because it forced government to adapt and improve delivery, because the public demand we build back better and because we have knowledge now that we did not possess before that this government is determined to deepen and accelerate our programme of reform."

Key parts of the reform declaration include:

• Looking beyond London to all corners of the UK, relocating 22,000 civil service roles outside of the capital by 2030, including 50% of senior civil servant roles - rebalancing of the workforce as most senior and policy positions are currently in London

• Investing in new training for both civil servants and ministers, strengthening traditional skills and building expertise in digital, data, science, and project and commercial delivery. A new training campus will be established, the prestigious Fast Stream graduate scheme will be updated and new apprenticeships will be introduced

• Embracing digital technology and data to deliver better services, developing a single sign-on for online government services, making it easier for citizens to access the services they need, and improving data sharing across government

• Improving delivery of projects and programmes with more rigour and accountability, and launching a new Evaluation Task Force, based in the Cabinet Office, to ensure proper scrutiny of real world results

• A new system of pay, reward and performance management, including the introduction of capability based pay for the senior civil service will be brought in. The Prime Minister and the Cabinet Secretary will oversee the performance of Permanent Secretaries, ensuring that they are delivering within their departments

• More opportunities for interchange and secondments for civil servants between the UK, Scottish and Welsh governments and the Northern Ireland Civil Service

"Our brilliant Civil Service is always seeking to improve and it is that dynamism that has helped us to accomplish extraordinary things during the pandemic to keep our communities safe and economy moving.

"As we look ahead to the opportunities ahead of us to build back a better and fairer Britain, we owe it to the people of this country to make sure their government is best equipped to deliver on their priorities.

"That’s why we are launching our blueprint for reform - to keep building on our expertise, modernise how government is run and transform this country for the better."

Mr Gove underlined the joint nature of tomorrow’s reform plans, with ministers and the Civil Service working in partnership to deliver the changes.

"On some past occasions, it has been regrettable that reform overall was seen as something driven by politicians, against the mulish opposition of bureaucrats. It is a missed opportunity when reform is felt as something done by ministers to civil servants, rather than with them. And greater open-ness in the deployment of outside talent to drive progress should never be understood as somehow a replacement for or usurpation of the vital role civil servants play.

"The Declaration published today is the fruit of discussion between ministers and officials. That is why when this morning Cabinet Ministers and Permanent Secretaries met together – for the first time – to approve the Declaration, there was a unity of resolve that we need to see these changes through."

• People - ensuring that government and the Civil Service has the right people, working in the right places, with strengthened performance management, aligned to rewards and bonuses, with stepped-up and more strategic monitoring of departmental performance, including through enhanced roles for non-executive directors.

• Performance - modernising how government works by putting digital at the heart of everything we do; with clear-eyed prioritisation, objective setting and evaluation; and champions for innovation, science and technology

• Partnership - strengthening the bond between ministers and officials, operating as one team from policy through to delivery and between central government and the institutions outside of it.

"Over the past 15 months, the pandemic response has proved what is possible when public servants go above and beyond to deliver for people all across the country.

"As we look forward now to renewal and recovery, this reform programme created by ministers and officials ensures that we will grip the challenges and opportunities together, as one government team."

"This new programme builds on the positive strides made to reform government and modernise the Civil Service over the last decade and gives it fresh impetus for the 2020’s.

"We have started on this journey already with new investment and new leadership in digital technology, the launch of a new curriculum and skills offer, and all the major departments relocating roles across the UK.

"With enhanced skills, better use of data, and a relentless focus on the end user, we can transform public services."

The reform declaration can be read here.