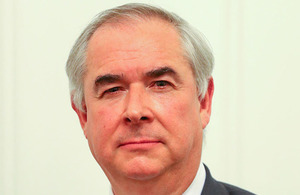 Commenting on his appointment as Attorney General, Geoffrey Cox QC MP has said:

"It is an honour to be appointed Attorney General for England and Wales. I look forward to building on the successes of my predecessor and I want to thank Jeremy Wright for his distinguished four years in the role.

"The Attorney General’s Office (AGO) is a unique and historic government department. I am proud to be joining the AGO, which has the highest staff engagement score in central Government. I look forward to working with the Solicitor General to play my part in making law and politics work together at the heart of the UK constitution."

Geoffrey Cox will cease all private practice as a barrister, as previous Law Officers have done on appointment.

The Attorney General and Solicitor General also carry out a number of functions in the public interest, such as considering unduly lenient sentences, and take action when there has been a contempt of court. These functions are carried out independently of their role as Government ministers.

Notes Geoffrey Cox QC MP was appointed Attorney General for England and Wales on 9 July 2018. He replaces Jeremy Wright QC MP who is now Secretary of State for Digital, Culture, Media and Sport.

Geoffrey Cox has been MP for Torridge and West Devon since May 2005. He lives in West Devon, near Tavistock, with his wife, Jeanie and his family. They have a daughter and two sons, Charlotte, James and Jonathan who attended the local school. Geoffrey was born and brought up in the West Country.

Geoffrey Cox has appeared in many high profile cases receiving national and international publicity from trial to appeal before the Court of Appeal, the Privy Council and the Supreme Court. His advocacy has been described by a professional court journalist in a recent book as “extremely persuasive”.

Geoffrey is a member of the Criminal Bar Association.