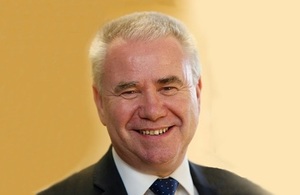 Professor Morley previously served as an Independent Non-Executive on RWM’s Board, and replaces current Chair David Batters. He will oversee RWM’s work to ensure that radioactive waste is safely and effectively managed, alongside the development of a Geological Disposal Facility (GDF) to permanently dispose of higher-activity radioactive waste.

Last autumn, after almost 14 years in post, Professor Morley retired as Chief Executive of Harlow Council, where he led its transformation to become an award-winning organisation. Success at Harlow led him to a range of national and regional roles supporting public sector improvement and partnership working.

"RWM performs a vital role in supporting the safe and effective management of radioactive waste.

"Professor Malcolm Morley’s leadership and experience of partnership working will be invaluable to RWM as it takes important steps on the journey to deliver a Geological Disposal Facility here in the UK, delivering a safe, secure and long term solution to managing higher-activity radioactive waste.

"I would like to thank David Batters for his leadership in the role."

"I am honoured to be leading RWM as Chair at this critical time. RWM’s mission to deliver a long-term solution for the safe disposal of higher-activity radioactive waste will protect future generations and our environment from the legacy of waste the UK has created over the past 60 years.

"RWM’s outstanding expertise in areas such as science and engineering, and its commitment to community engagement, will help deliver an infrastructure project like no other we’ve seen before in the UK and I am delighted to be a part of the team."

Professor Morley was awarded an OBE in the 2016 New Year’s Honours for services to local government and is a Visiting Professor at 2 university business schools.