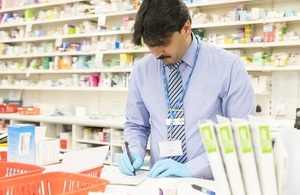 The government has announced how it will take tougher action on fraud and save hundreds of millions of pounds for the NHS over the next 5 years, increasing the money available for improving patient care.

The plans were announced by Health and Social Care Secretary Matt Hancock.

The new approach will start with a commitment to halve prescription fraud, which costs the NHS £256 million a year.

Prescription exemptions will be digitised, allowing pharmacies to check whether the patient does not have to pay charge before their medication is dispensed. This will be piloted next year, before being rolled out across the NHS.

The focus on prescriptions is one aspect of a wider crackdown on NHS fraud, which will prevent up to £300 million being lost to fraud by April 2020. This is part of the government’s commitment to ensuring public finances are managed responsibly and that every penny invested goes towards improving care.

Further measures being introduced to stop fraud include:

• the introduction of a new counter-fraud profession in central government, bringing together around 10,000 counter-fraud specialists, including 400 focused on fraud in the NHS

NHSCFA will take forward these measures. It will work with its data-sharing partners to analyse large amounts of information and identify anomalies, unusual activity and inconsistencies in the NHS, referring to NHS investigators for further action.

NHSCFA was set up in November 2017 and replaces NHS Protect, which has been working to stop fraud since 2010.

Fraud in the NHS ranges from a few pounds, to hundreds of thousands and occasionally millions.

"Those who abuse the NHS and choose to line their own pockets with money that should be spent on patients and frontline care will no longer have anywhere to hide. The new technology and analysis, combined with intel and experience of counter-fraud specialists will form the starting point of this new fight against NHS fraudsters.

"We’re determined to make sure every penny of the extra funding we are giving the NHS as part of our long-term plan is properly spent. The message is clear: the NHS is no longer an easy target, and if you try to steal from it you will face the consequences."

"I am delighted that the Health and Social Care Secretary is showing such a keen interest in addressing fraud and supporting the NHS Counter Fraud Authority in its vital mission to prevent and detect fraud against the NHS. It is key to our success that we collaborate with others and I am confident that as we work with partners this ambitious target will be achieved.

"The more data sets we are able to access from partners such as Cifas and the NHS Business Services Authority, the more fraud we can detect and prevent. NHSCFA are actively engaging with the fintech sector to identify technological solutions that could enhance data examination and exploitation capability."