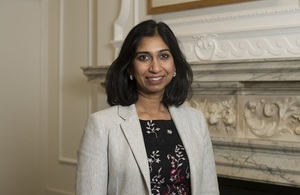 The Attorney General also carries out a number of functions in the public interest, such as considering unduly lenient sentences, and taking action when there has been a contempt of court. These functions are carried out independently of their role as a Government minister.

"I am honoured to be appointed as Attorney General for England and Wales and look forward to working with the many excellent government lawyers and officials.

"I want to thank my predecessor Geoffrey Cox QC MP for leaving me with such a strong record to build upon.

"One of my first priorities is to continue the Government’s work in rebuilding confidence in our justice system, particularly with victims.

"I am proud to be joining the Attorney General’s Office (AGO), a unique and historic government department that makes law and politics work together at the heart of the UK constitution."

Called to the Bar in 2005, Suella Braverman specialised in public law and judicial review. From 2010-2015 she was on the Attorney General’s Panel of Treasury Counsel. She has defended the Home Office in immigration cases, the Parole Board in challenges by prisoners and the Ministry of Defence in matters relating to injuries sustained in battle.

Suella Braverman was Parliamentary Under Secretary of State at the Department for Exiting the European Union from January to November 2018. She was elected as the Conservative MP for Fareham in May 2015.

Suella was educated at Heathfield School in London and went on to study Law at Queens’ College, Cambridge. She gained a Masters in Law from the University of Paris 1, Pantheon-Sorbonne and qualified as a New York Attorney.